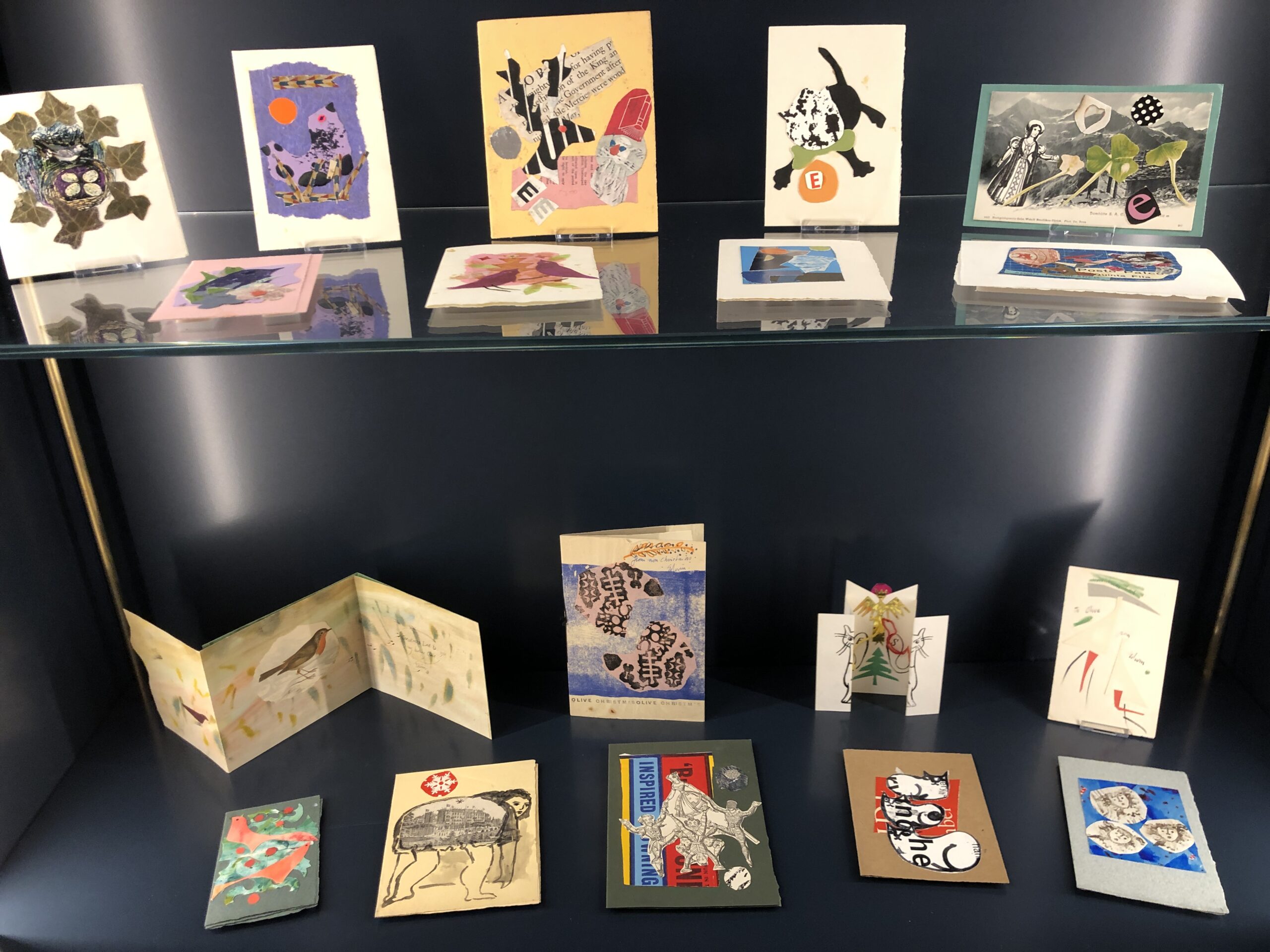 In celebration of the Festive Season, our College Archivist Frieda and Curator Laura have been busy collating handmade Christmas cards from the Olive Cook collection which are now in a special display in Newnham College, situated in the supervision corridor, by Supervision Room 1 at the Iris Café end. 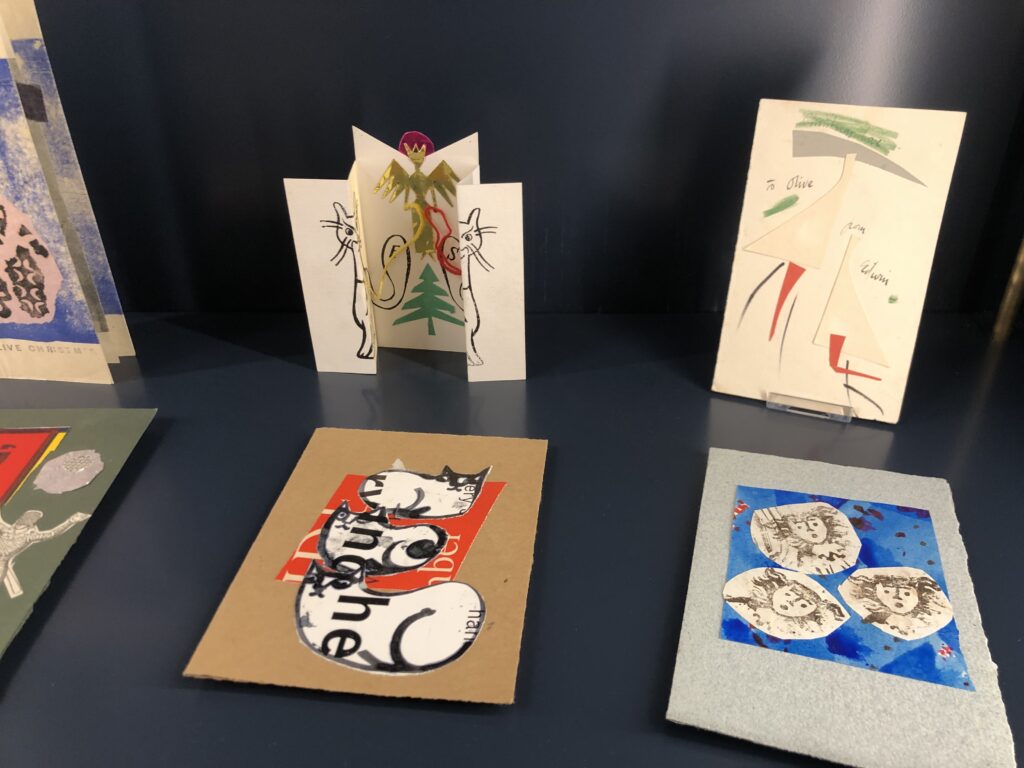 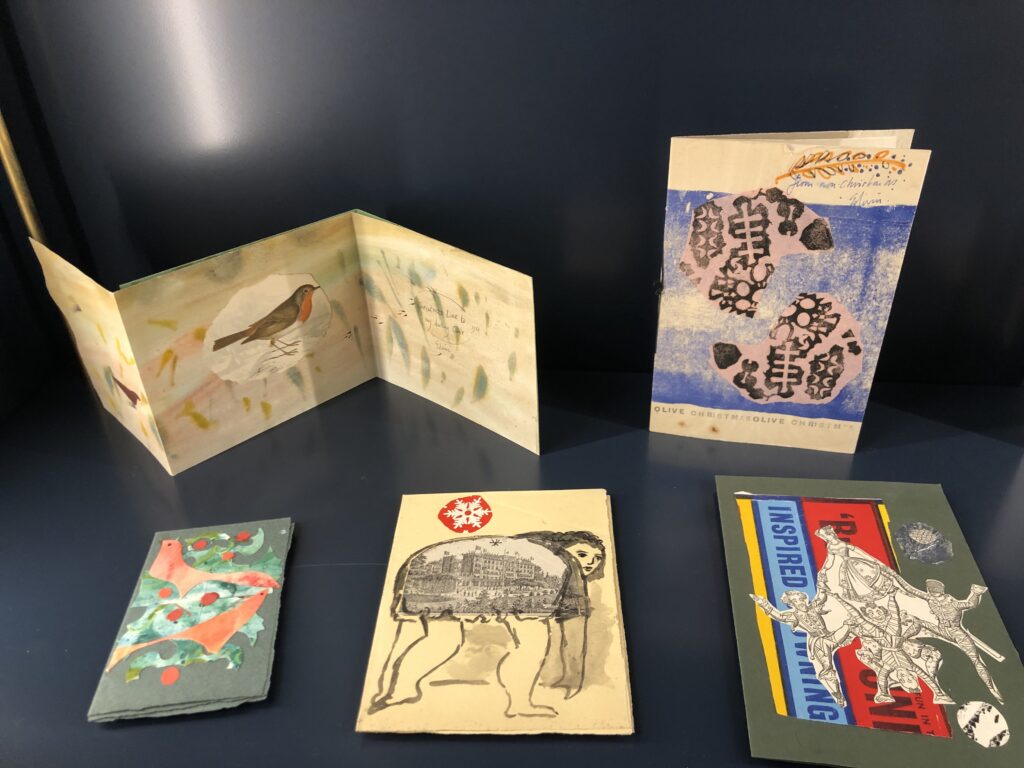 Olive Cook (1912-2002) was born and educated in Cambridge, studying Modern Languages at Newnham from 1931 to 1934. After graduating, she worked as a typographer at Chatto & Windus, which combined her interests in literature and design and also gave her a thorough knowledge of book production. In 1937, she became Supervisor of Publications at the National Gallery, London.

Olive had been artistically gifted since childhood, and in 1945 she left the National Gallery to pursue her own writing and painting, encouraged by the man who was to become her husband, the photographer, painter and architect Edwin Smith. From 1952 to 1964 she was the English representative for the Carnegie Institute at Pittsburgh, which brought her into contact with a large number of contemporary artists who became friends, including Stanley Spencer and Oskar Kokoschka. During the 1960s, Olive and Edwin collaborated on an acclaimed series of books, which were said to have ‘opened the eyes of a generation’. Olive’s notes accompanied Edwin’s photographs in a series which included English Abbeys and Priories, The English House through Seven Centuries, and The Wonders of Italy. After Edwin’s death, Olive supported the foundation of the Fry Gallery at Saffron Walden in 1985 and was a driving force in the affairs of the Gallery until her death at the age of 90 in 2002.

Olive Cook’s archive, which came to Newnham in 2003, consists of correspondence, photographs, artwork, cuttings and articles, and books. It includes a large number of handmade greetings cards sent between Olive and Edwin and other family members, and also artist friends.

Please do come and take a look if you are in College or visiting.