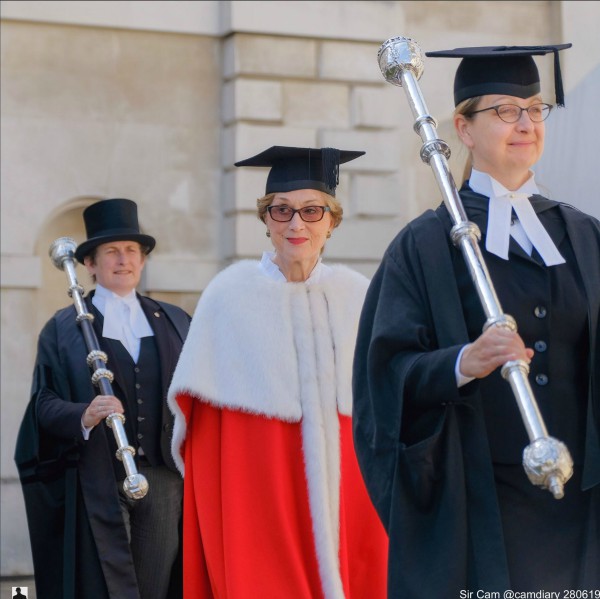 Black robes in a heatwave, farewells to friends, and a certificate held tightly in hot hands.

Three years of challenge, friendship and learning came to a close for Newnham’s graduating students today. And, as over 100 women processed through the Pfeiffer Arch, a new phase of life started.

The ceremony also marked both a close and a beginning for Dame Carol Black, Principal of Newnham.

Dame Carol told the students, “This is a very poignant year for me. It is my last time as Principal and it is the last time I shall lead out my undergraduates to graduation. You’ve been a fantastic year. I’ve really enjoyed working with you getting to know you, and I wish you all happiness and success in the future.”

The graduating students processed through the Pfeiffer Arch and along Newnham Walk towards the Senate House, accompanied by College Fellows and cheered on by families and College staff.

Many remembered their own graduation day, whether here in Cambridge or across the world. The journey from the Pfeiffer Arch to the Senate House has a special significance to Newnham, recalling as it does the undergraduate riots of 1921, and the long fight for women’s equality within Cambridge.

Dame Carol acted as Deputy Vice Chancellor at Senate House, conferring the degrees on the women she has worked with for the last three and four years.

The students formed a Guard of Honour around Dame Carol as she left the Senate House for the last time, following a Cambridge tradition for the departing Heads of Houses.

Dame Carol will lead a Home Office Review into the complex relationships between drugs and knife crime, alongside her existing role as Chair of the British Library.

The Principal-elect of Newnham College is Alison Rose, former Ambassador to the Kingdom of Belgium, and herself a Newnham alumna.

Last year’s JCR President, Jess Lock, wrote to her fellow graduands, “Wherever our post-Newnham lives may lead, I trust we are rooted in friendship, love and aspiration, and that we will use our past to shape the future.”