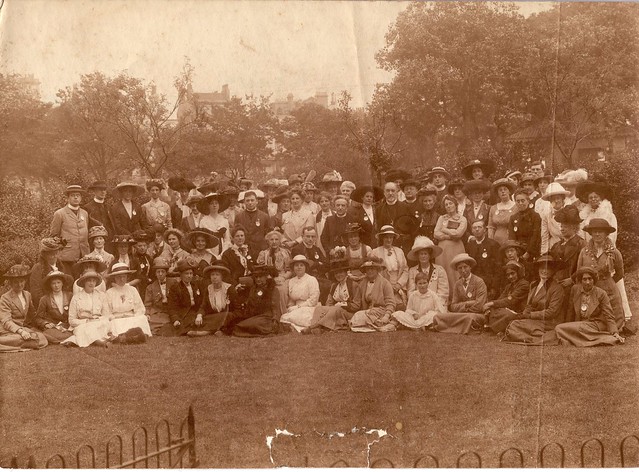 A rare photograph discovered in the Women’s Library archives has highlighted the significant, but often unrecognised, role undertaken by Indian women in the suffrage movement, and the remarkable experience of one Indian doctor.

The photograph of a Church League for Women’s Suffrage meeting in Brighton in 1913, shows two Indian women in the group. One smiles out with a quizzical gaze, her delegate badge for the CLWS event proudly displayed.

With help from Newnham’s archivist Anne Thomson, researcher Clare Wichbold was able to identify the woman as Dr Susila (Susie) Bonnerjee (NC 1891). Dr Bonnerjee was Secretary of the Ealing Branch of the Church League for Women’s Suffrage. The Brighton photo snapped a moment of a life of breakthroughs, struggle and challenge.

“The Brighton photo snapped a moment of a life of breakthroughs, struggle and challenge.”

Dr Susila Bonnerjee was the eldest of three remarkable sisters who all studied at Newnham. Their father, W. C. Bonnerjee, the first president of the Indian National Congress, was himself a passionate believer in education, for women as well as men.

Accordingly, the children travelled to London for their education, a difficult experience. They faced racism and racial abuse, alongside the difficulties of being away from their parents for long intervals of time.

However, Susila, always known as Susie, remained determined. In 1891, she began her studies at Newnham College, and studied for the Natural Sciences Tripos. She then joined the London School of Medicine for Women, and was attached to the Royal Free Hospital, gaining her MB degree in 1899.

Susie joined the Cambridge Mission to Delhi, working as a doctor in appalling conditions, which damaged her own health. Her sister Janaki recalled, “she was the only doctor in the Mission Station at Karnal during a severe plague epidemic and was continually called up at night, and could not sleep in the intervals.” The resultant exhaustion meant she was never as strong again, and would later lead to her early death. 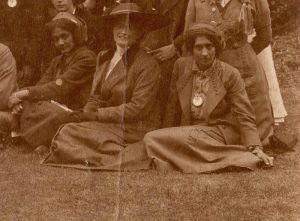 Dr Susie Bonnerjee is on the left, smiling. The Indian woman on the right may be her sister Nellie (Nalini) or sister-in-law Kitty (Amiya).

Meanwhile, Susie’s younger sisters Pramila and Janaki themselves attended Newnham. Pramila came up in 1900 to study Classics, and Janaki in 1904 to study Natural Sciences.

The irrepressible Janaki remembered in her autobiography that “I loved all my three years at college – the delight of being ‘on one’s own’ and meeting all sorts of new and exciting friends; the lovely gardens at college; the expeditions around Cambridge; the fun of being able to specialize and work in well-equipped laboratories after the makeshifts we had at school (though modern students would not think our laboratories of 1904 well-equipped!) – all these were perpetual pleasures. The friends I made there are still my great friends now…”

The Struggle for Equality

Life was less easy for Susie in Kolkata, where her family was unsupportive of her aim to set up a medical practice. Susie returned to England, and took up research and teaching work in Cambridge. She was Demonstrator of Physiology in the Balfour Laboratory from 1910-12, teaching a new generation of Newnham and Girton students.

Meanwhile, Susie campaigned for women’s suffrage, and became the Secretary of the Ealing Branch of the Church League for Women’s Suffrage. The CLWS was noticeably more supportive of militant tactics than Millicent Garrett Fawcett’s NUWSS: perhaps a breakaway from Newnham’s emphasis on peaceful methods of campaigning. Indeed, a number of other South Asian women were active in the suffrage movement, most famously Princess Sophie Duleep Singh, who led tax strikes and marches.

However, this well-qualified doctor never succeeded in setting up a medical practice of her own, despite attempts in Kolkota and in Britain. Janaki recalled “her nationality prevented her from entering into a partnership with other medical women, as they preferred to take English partners, and the same difficulty held as regards hospital appointments. In India, she was handicapped by her English upbringing and lack of familiarity with the vernacular of the places she was in, and also by her health.”

For Susie, as with many women, it was the First World War that brought freedom and opportunities: in 1915, she was able to take a temporary post of Home Surgeon in a Bristol Hospital for six months. Her sisters recalled her happiness at finally having the medical role she had sought.

Her health, never robust after her terrible experience during the plague epidemic, went downhill further during the war. Seeing the women’s suffrage act passed in 1918 must surely have been a joy, amidst the disappointment and struggles to be accepted as a medic.

Susie Bonnerjee left England for India, where she died in 1920. Passionate about education to the last, she left in her will a scholarship for Indian women to have teacher training in England. Over her lifetime she had campaigned for suffrage, saved lives, challenged racism, and taught a new generation.

“Susie led an extraordinary and courageous life, and persisted in the face of many challenges as an Indian suffragist.”

Newnham Fellow, sociologist Dr Manali Desai, commented, “Susie led an extraordinary and courageous life, and persisted in the face of many challenges as an Indian suffragist. Although she never fully gained acceptance in India or England, Newnham is proud to have been her home for a few years. She leaves an invaluable legacy to future Newnham graduates.”