Dr Jane Morris is a consultant psychiatrist and psychotherapist specialising in the mental health of adolescents and young adults and is currently Lead Clinician for the North of Scotland Managed Clinical Network for Eating Disorders and Chair of SIGN Guideline on Eating Disorders.  She came to Newnham College to study English and after graduation went on to pursue a career in medicine. She is particularly interested in the health, education and development of children and young people. She is a former President of the Roll 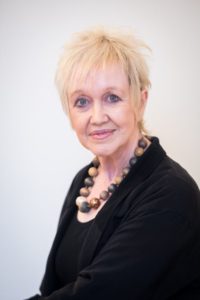 Hello Dr Morris! How are you?

​Well, really very lucky, because I haven’t been ill, and I’ve been less locked down than most of us.  I have an office and some part time duties on a hospital ward where we don’t actually have any cases of COVID.  It’s wonderful to have constructive work to do that brings me into contact with people

Concerns about student health – physical and mental – are increasingly on our minds. Can you share your perspective?

We’ve all become more aware of an acute crisis of well-being and mental health in our universities.  But this is against a background of chronic and growing challenges.

On one hand we are seeing a welcome spotlight shining on the inadequacy of provision and perhaps even the need for a pretty radical rethink about the design of higher education in the UK.  That could be exciting.

On the other hand, too much of the distress comes from issues that might have been predicted in advance, and I sympathise with young people when they feel they are paying a high price for keeping their elders safe.

In the field of psychiatry, we’ve experienced a massive shift towards use of technology to deliver therapies and meetings, and universities are having to embrace these media too.

This might help integrate ‘home’ and ‘away’ clinicians to support undergraduates, avoiding the geographical and temporal splits between term time and vacations and improving access.

“If last year you had showed me what I am writing now, I would have thought it a work of science fiction!”

During the first lockdown, you hosted an event, ‘Reimagining student health’ with Newnham students. Can you tell us more?

I’ve spent my career working on the borders of child and adult mental health services and consider adolescence to extend from at least 14 to 25, with a lot of further maturing after that. I’ve also worked with university ‘Mental Health Mentors’ and seen the sheer confusion of access to services around the transition from school to university, but most of the books I could find that address the topic are American. Earlier in the year Cambridge University Press commissioned me to write a book called ‘Improving Student Mental Health’.

No sooner had I started to set up meetings and discussion groups than COVID struck. I could already see that lockdown was affecting the student experience and would have to be considered as part of the book.  The Black Lives Matter movement was also very strong, and I realised I would need to give BAME issues far greater prominence in the book too.

I turned to the wonderful group of women I have met through Newnham to find a new approach. Clare McGregor (NC 1991) – who understands so well the dynamic process of writing books – suggested an online workshop, and even offered to facilitate it herself.

It was gratifying to have so much positive feedback in the workshop and to see the cross-generational work going on, but it was also salutary to have criticism and challenge from some of the participants, especially younger ones.

Due to the changes we’re seeing, my mental image of the book is a moving target – if last year you had showed me what I’m writing now, I would have thought it a work of science fiction!

“…it was also salutary to have criticism and challenge from some of the participants, especially younger ones.”

Can you tell us about those moments of ‘salutary … criticism and challenge’?​

It’s not so much a matter of feeling ‘comfortable’ in the discussion as having a sense of security in which to experiment with voicing opinions that are still shaping themselves or raw.

This was underlined when after the event we heard how exhausting it could be for BAME individuals to have to assume the role of sole representative for people of colour. I should have considered this in my groupings. I was privileged to have permission to listen to recordings of the workshops, and saw and heard the exact dynamic that people described. I was seeing something that had, for me, been largely theoretical before.

And finally, we like to ask those who we interview to tell us about their favourite spot in Newnham, whether because of a particular memory or somewhere beautiful. Does one come to mind for you?

Is Newnham still blessed with those grandiose 19th century bathrooms?  There were still one or two of them last time I looked.  In my first year I was often unable to find shillings for my gas meter, so I spent many of those Siberian nights in a hot bath with a pile of books.  Most of my set texts had wavy pages.

Thank you for your time, Dr Morris!