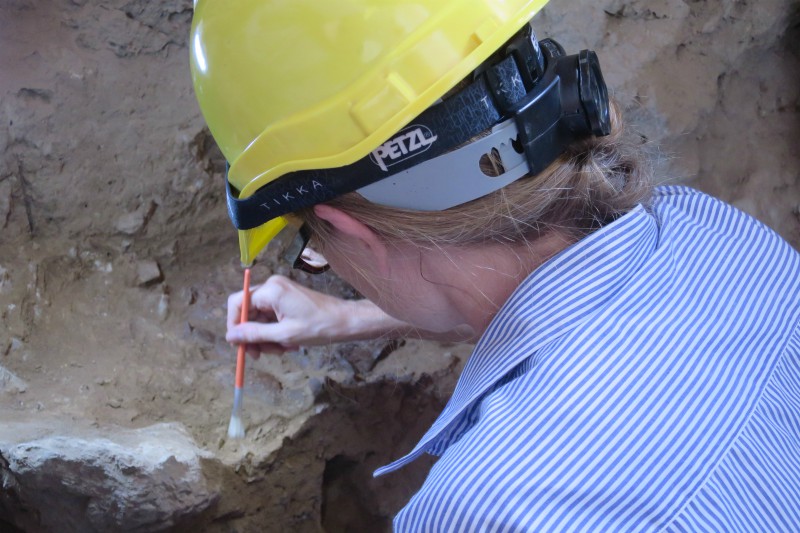 What did Neanderthals think about death and its aftermath? Biological anthropologist and Newnham Fellow Dr Emma Pomeroy made a discovery in 2018 that may shift the way we understand Neanderthals and their similarities to Homo sapiens.

In the 1950s, an excavations in Shanidar Cave in northern Iraq uncovered the remains of at least 10 Neanderthals; the excavator Ralph Solecki argued that the findings gave evidence that Neanderthal’s were not the brutish creatures that had been thought, but rather had a society with beliefs which involved ritual burial. However, some findings were controversial, and the 1950s excavations did not have access to many of our modern archaeological techniques. The question of whether Neanderthals intentionally buried their dead and performed funerary rites remain contested to this day.

Carefully excavating at the edge of Solecki’s “deep sounding”, over 7 m below the surface, she was the first person to see a skull that had been buried for over 70,000 years. It was crushed almost entirely flat, but she quickly recognised what she had found. This new burial gives fresh evidence that can be used to debate the evolution of cognition, group memory and intentionality. Using modern techniques, the team hope to develop a rich and nuanced understanding of the lives of the Neanderthals of Shanidar Cave.

“It’s an immense privilege to work at such an iconic site as Shanidar Cave, and fantastic for the team to find these important new Neanderthal remains. This offers us a really exciting chance to understand both the old and new Neanderthal finds in greater depth, and to make novel contributions to debates surrounding Neanderthal behaviour and evolution,” Emma explained.

In January 2019, Emma and Graeme will host a workshop on ‘Neanderthal notions of death and its aftermath’, bringing together leading specialists in these various disciplines to scrutinise the new evidence in a comparative context.
They will explore how to identify intentional treatment of the body in archaeological contexts, and how recent methodological advances across multiple fields can inform us about mortuary activity, its environmental context, and relationship to “significant places” in the landscape.

Emma has just returned to Newnham as a Fellow, having held a Junior Research Fellowship here in 2012-2015 and Bye-Fellowship in 2016-2017 before taking up a Lectureship at Liverpool John Moores University. In January 2019 she returned to Cambridge as a Lecturer in the Department of Archaeology.

“I am delighted to be back at Newnham,” said Emma. “The College provided me with a friendly and supportive environment in which to make the transition from PhD to Postdoc, and gave me an invaluable opportunity to stay in academic research through a Junior Research Fellowship. For me, it’s especially inspiring to think that Professor Garrod – a pioneering female academic and archaeologist who worked in the Mediterranean and south west Asia – was also here at Newnham. The naming of the new College building after her is a fitting tribute to a truly exceptional woman.”

Emma is also co-director of the Old St Bernard’s Hospital Project, which investigates health, diet and migration among skeletons from a 16th-17th century mariner’s hospital in Gibraltar. Due to its date and location on major shipping routes, the Hospital collection has enormous potential to shed new light on disease and migration at a time when trade and human movements first became truly global.

No doubt Dorothy Garrod, who travelled across the Middle East for her own excavations and made major contributions to Neanderthal and early modern human archaeology, would be fascinated by the news.

(Thanks to Prof Graeme Barker for the photos)