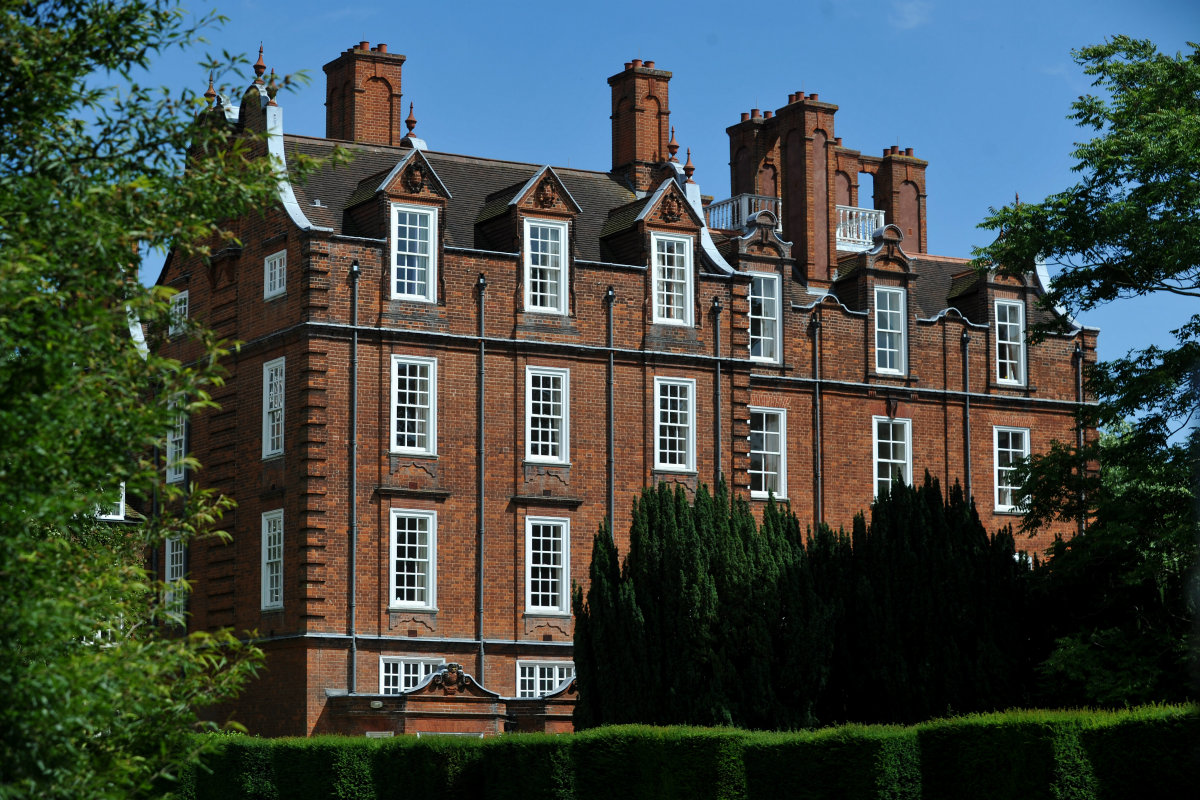 Old Hall was the first building completed by Basil Champney in 1875. Known in turn as Newnham Hall, South Hall, and finally Old Hall, it was opened in 1875 when Miss Clough came into residence with Miss Paley as the first resident lecturer. The building was quickly outgrown, to be joined by ‘North Hall’, now Sidgwick. 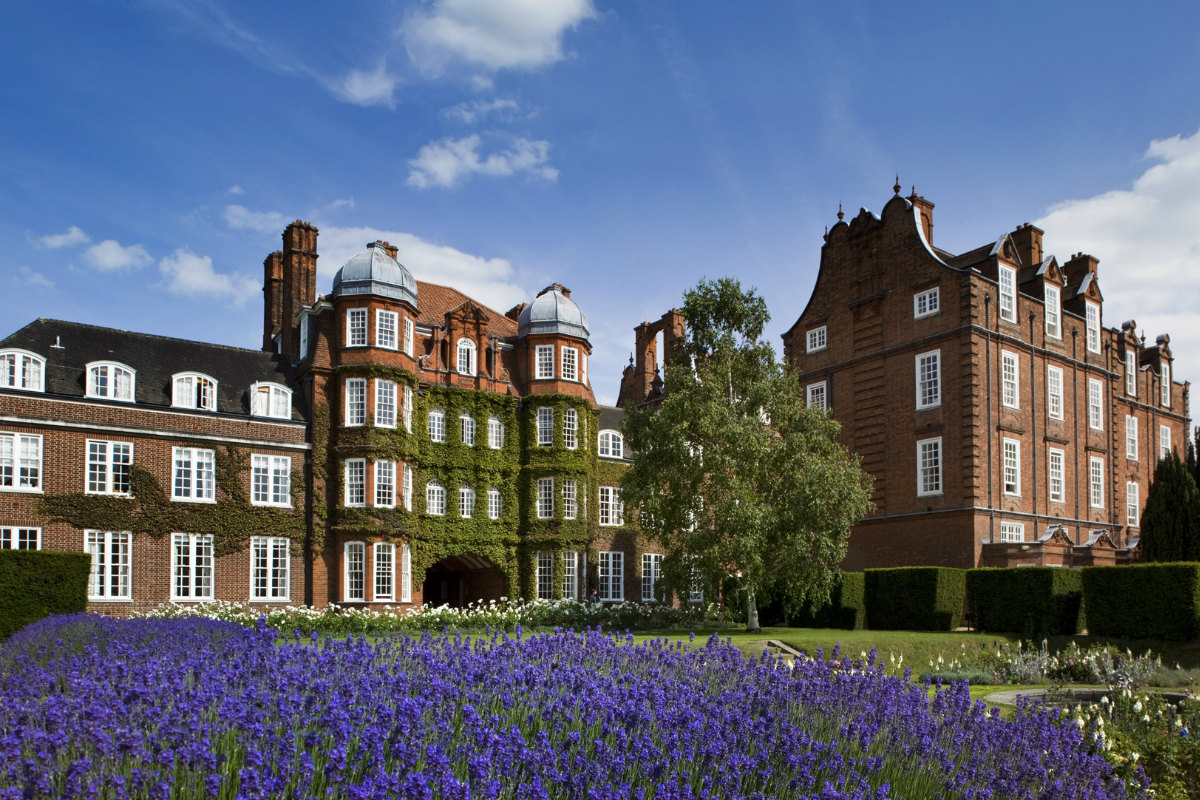 Pfeiffer Arch was completed in 1893, 18 years after Old Hall. This is because it was not until 1892, and some years of hard negotiation that the Sidgwicks had persuaded the local authorities to close the lane which ran on from the end of Newnham Walk at the Pightle down to Grange Road. Instead Sidgwick Avenue was built. This was a crucial development for the College. 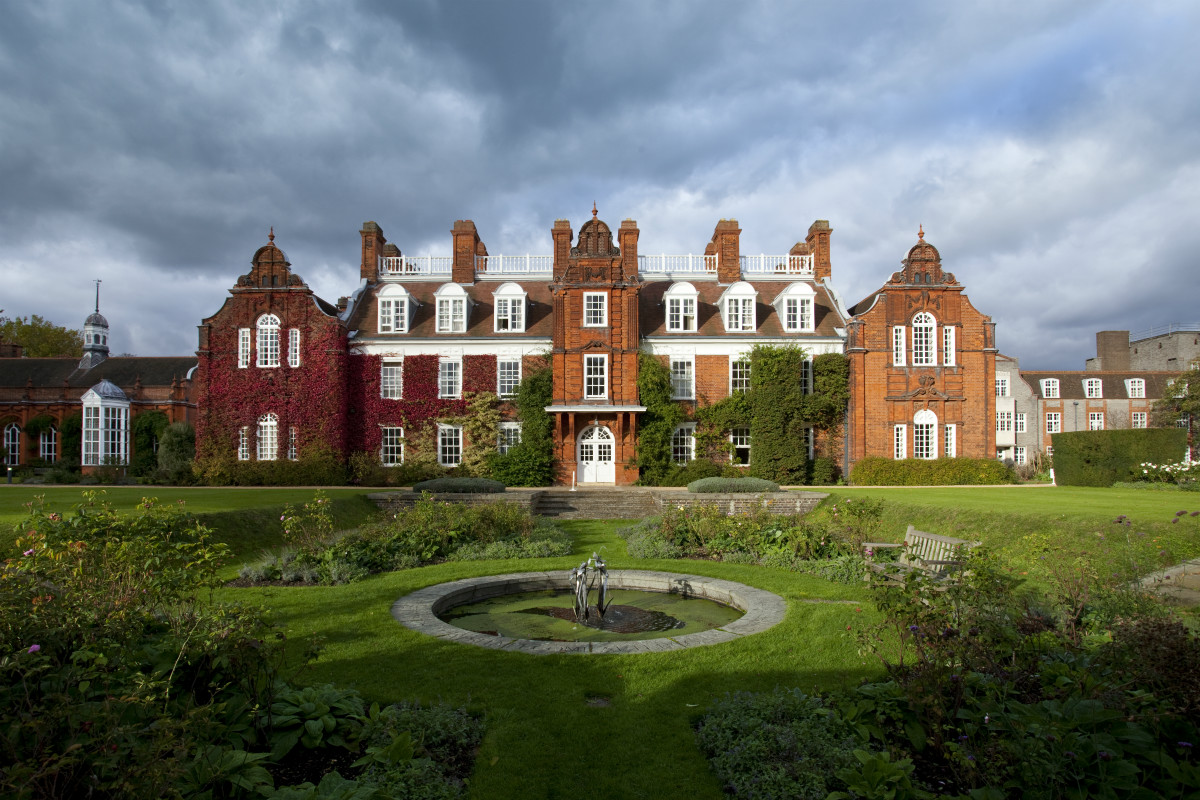 Sidgwick Hall – originally called ‘North Hall’ – was the College’s second building. When it was built, in 1880, it was divided from the rest of the College by Newnham Lane, the continuation of Newnham Walk through to Grange Road. After Newnham negotiated the closure of the lane (and its replacement by Sidgwick Avenue, to the north of the building), the two parts of the College were united. 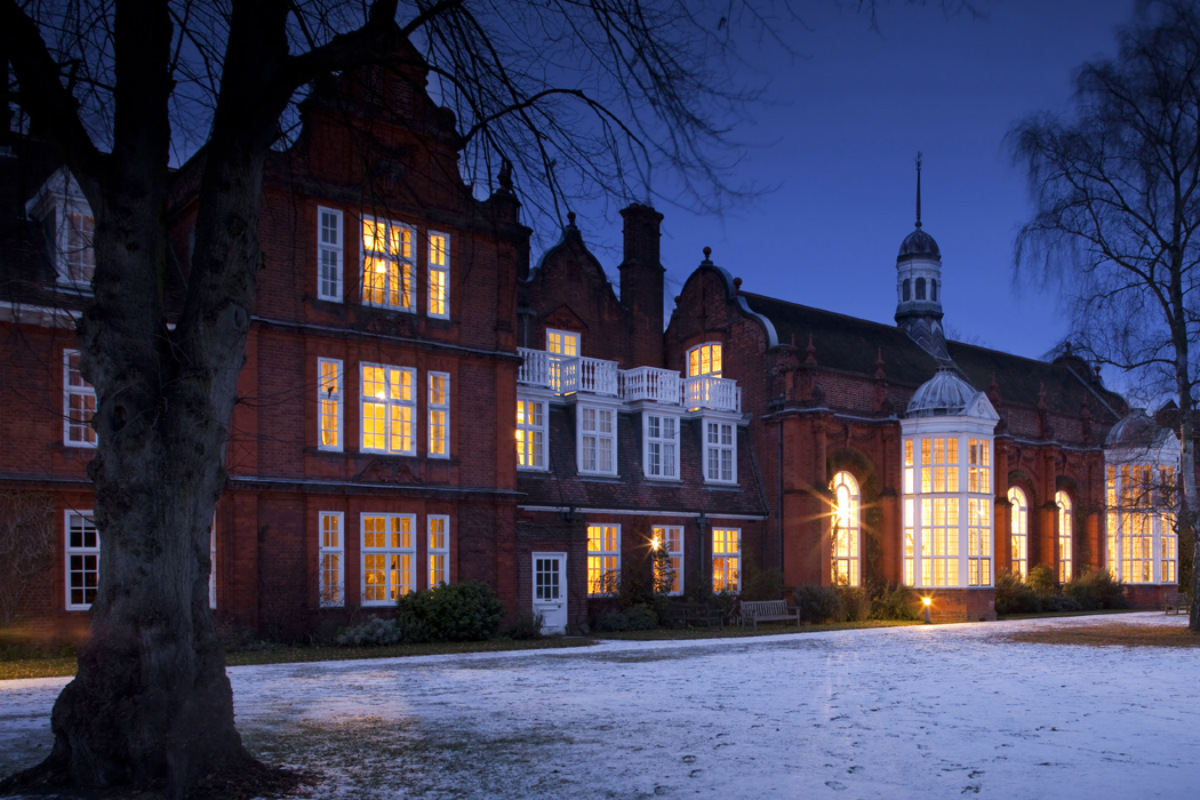 Clough Hall was built in 1886.   After Newnham College was incorporated as a not for profit association in June 1880, the College went ahead with building the splendid Clough Hall and its fine Dining Hall. 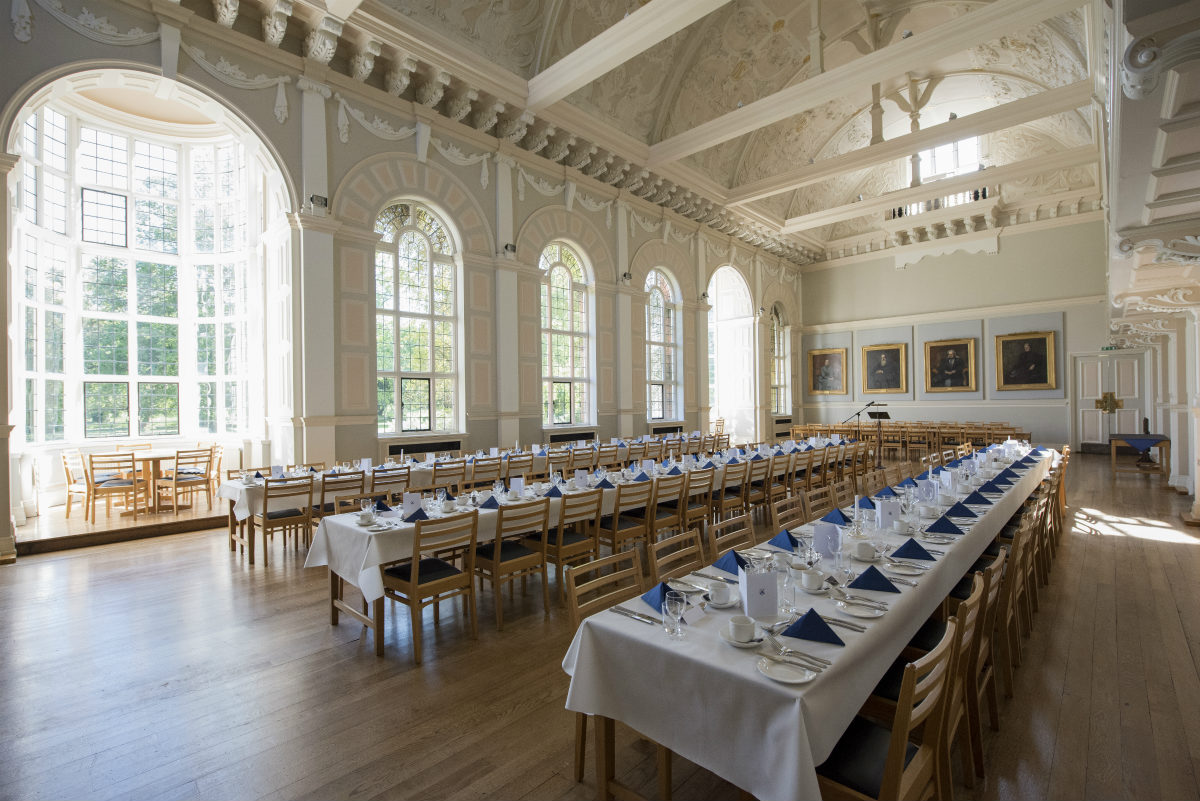 Clough Hall, the College dining hall, with its magnificent ceiling. 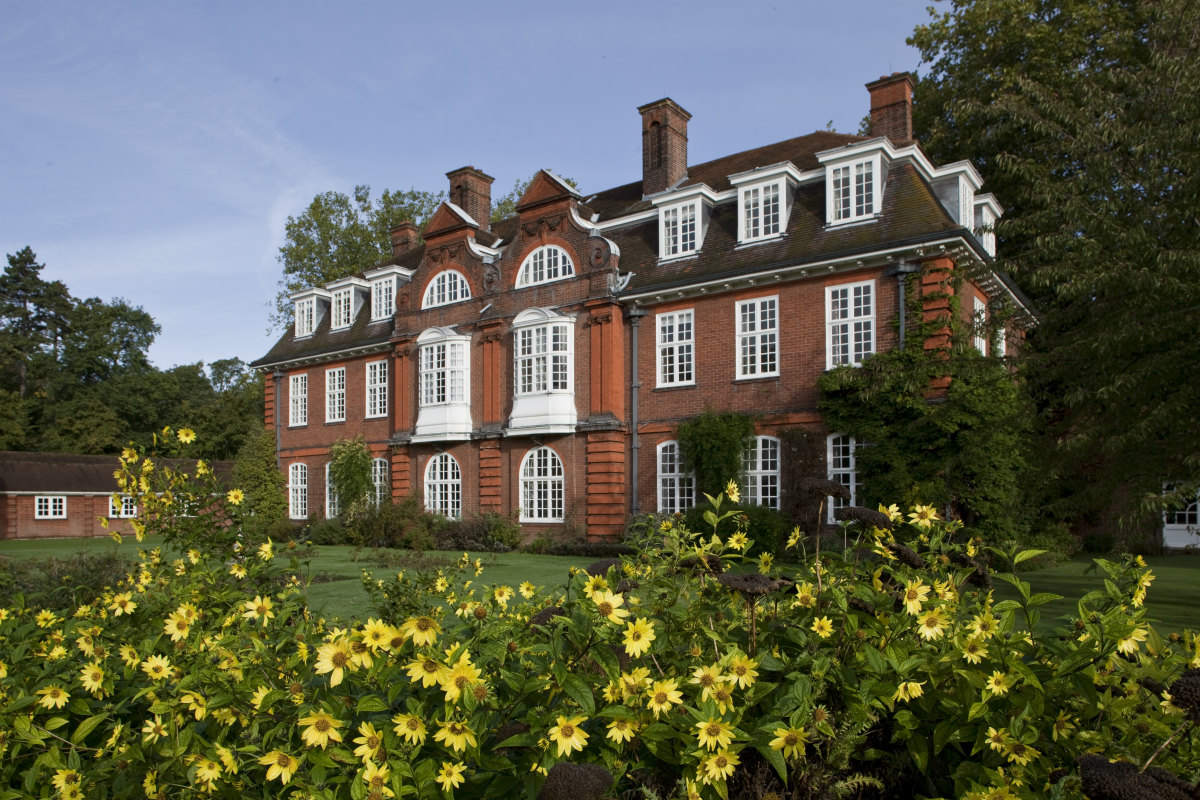 The Kennedy building was built in 1906, to accommodate the growing number of academic staff, and so unlike the other main buildings, does not have its own dining hall (students dined in their own building until the early sixties, presided over originally by the Vice-Principal for their own hall, and later on by the Tutor for their own hall). Its name commemorates Marion Kennedy (1836-1914), who had been honorary Secretary of the College from 1880 until 1904. 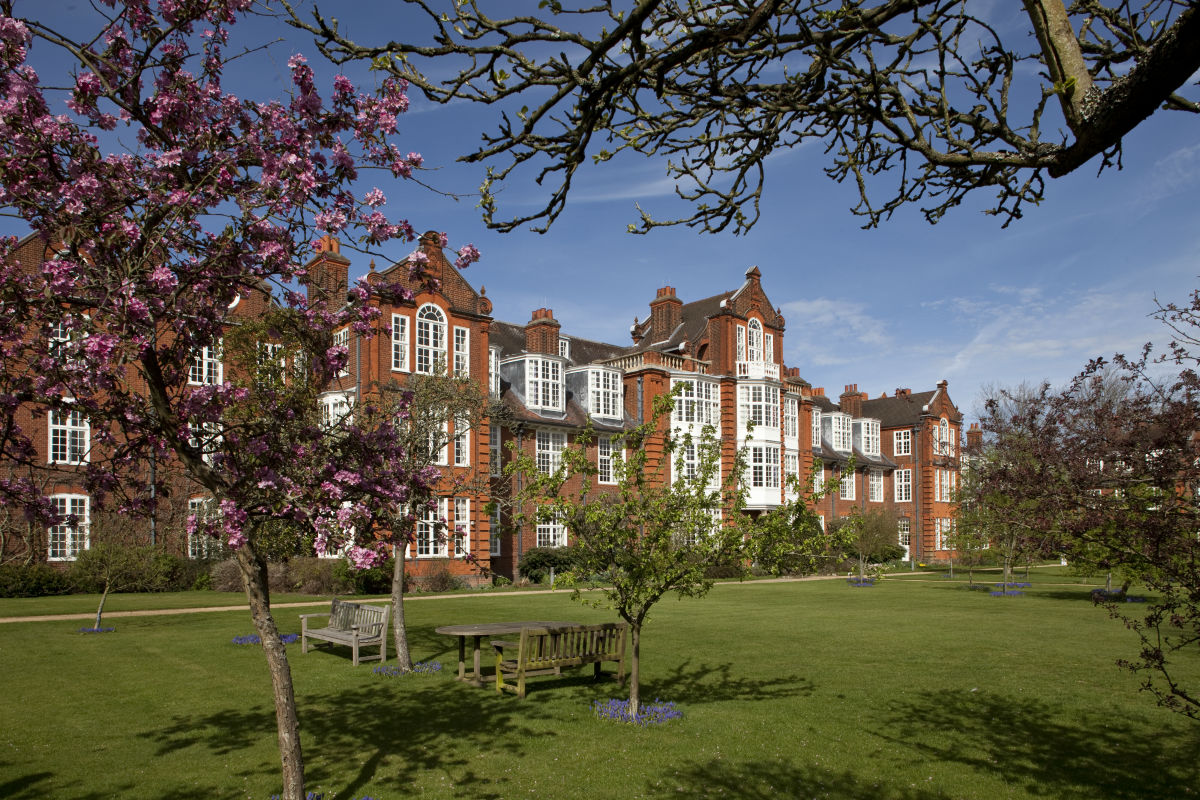 Last of all the Champneys buildings is Peile, completed in 1910.  Peile Hall commemorated the work which Annette and  John Peile had done for Newnham. Dr. Peile, Master of Christ’s College, was President of the College from 1890 to 1909. Mrs. Annette Peile organized the correspondence classes which helped many women unable to come up to Cambridge. 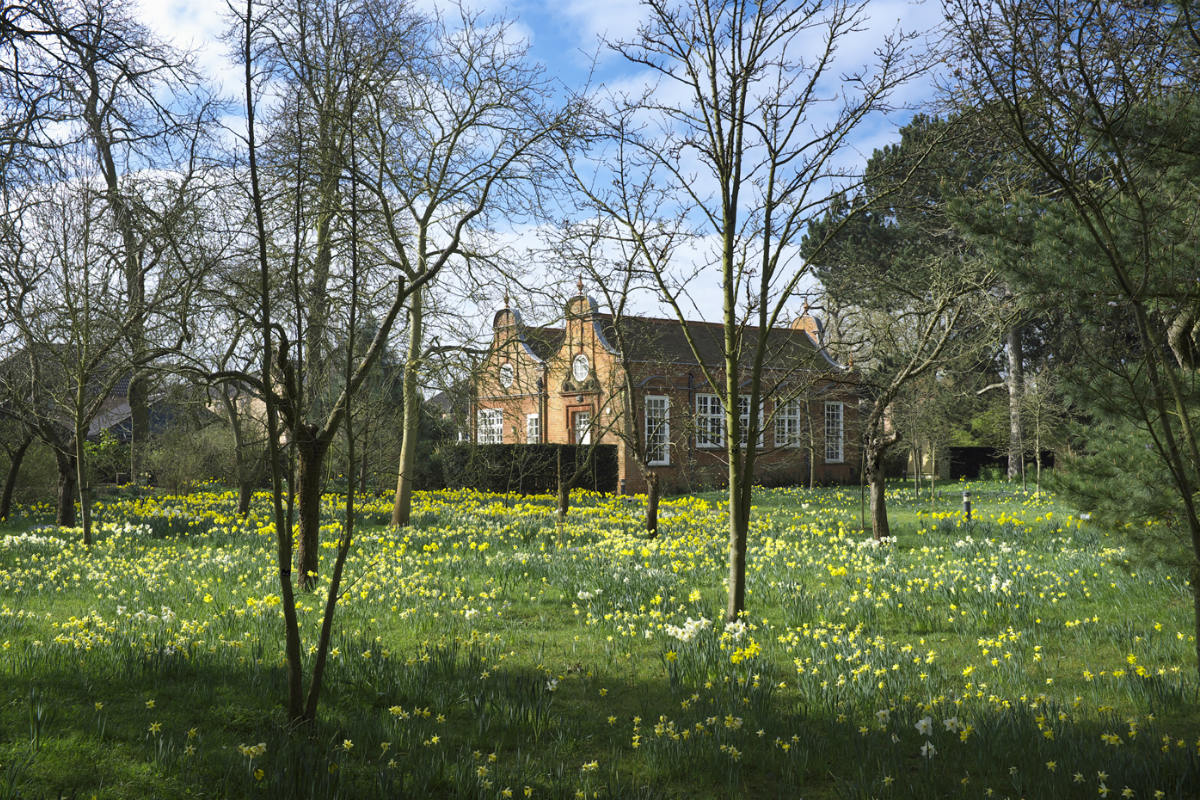 Newnham’s Old Laboratories were built in 1879.  At the time the sciences were becoming increasingly important in Cambridge, but women were not allowed to use the University’s laboratories.  Friends and students of Newnham subscribed to provide a laboratory where women could attend demonstrations and conduct experiments. 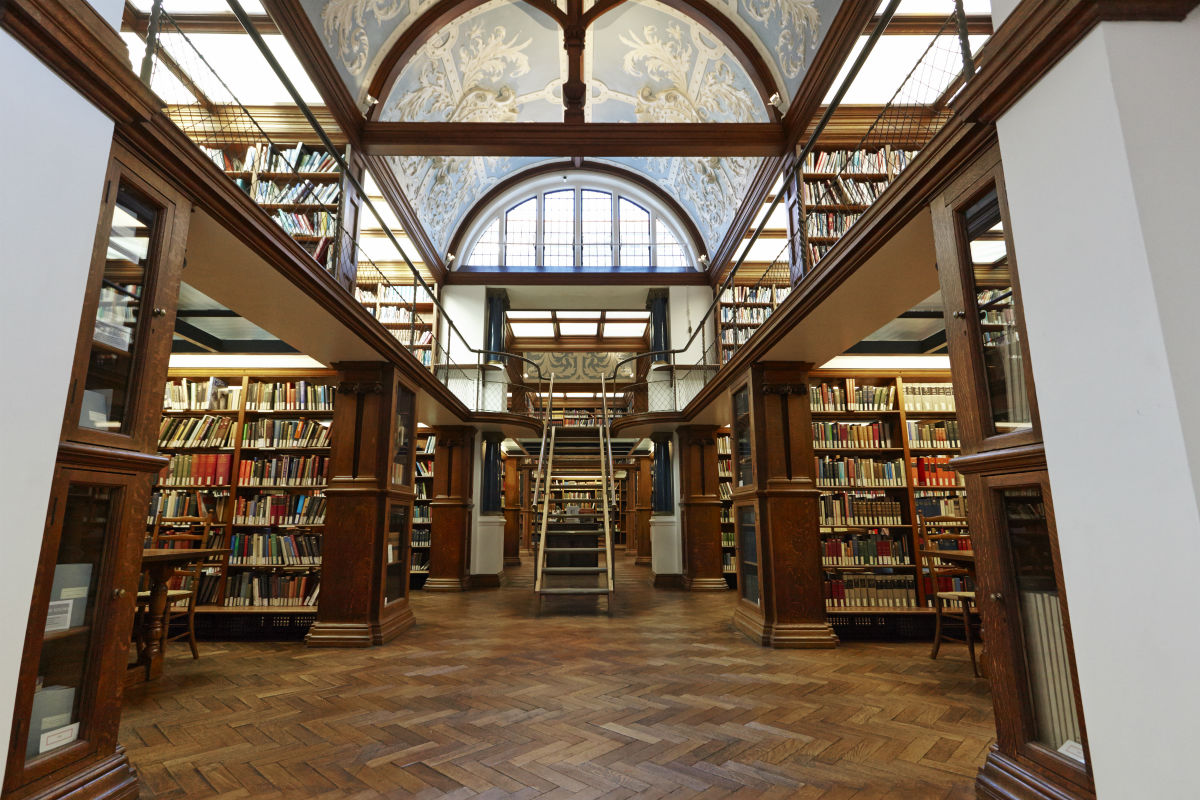 The original Yates Thompson Library was built in 1897 and extended in 1907.

In “A Room of One’s Own”, Virginia Woolf describes how:

The gardens […] lay before me in the spring twilight, wild and open, and in the long grass, sprinkled and carelessly flung, were daffodils and bluebells, not orderly perhaps at the best of times, and now wind-blown and waving as they tugged at their roots. The windows of the building, curved like ships’ windows among generous waves of red brick, changed from lemon to silver under the flight of the quick spring clouds.

Newnham College was in the unusual and fortunate position to have had a College architect, Basil Champneys, from the first building on the site in 1875 – ‘Newnham Hall’, now known as Old Hall – to the completion of Peile Hall in 1910. Subsequent distinguished architects have relished the chance to respond to Champney’s designs. A number of the buildings, both Victorian and modern, are now Grade II* and Grade II Listed.

Champneys’ work established the precedent for high quality buildings with positive relationships with their landscape context and set the scene for the character of the College today.