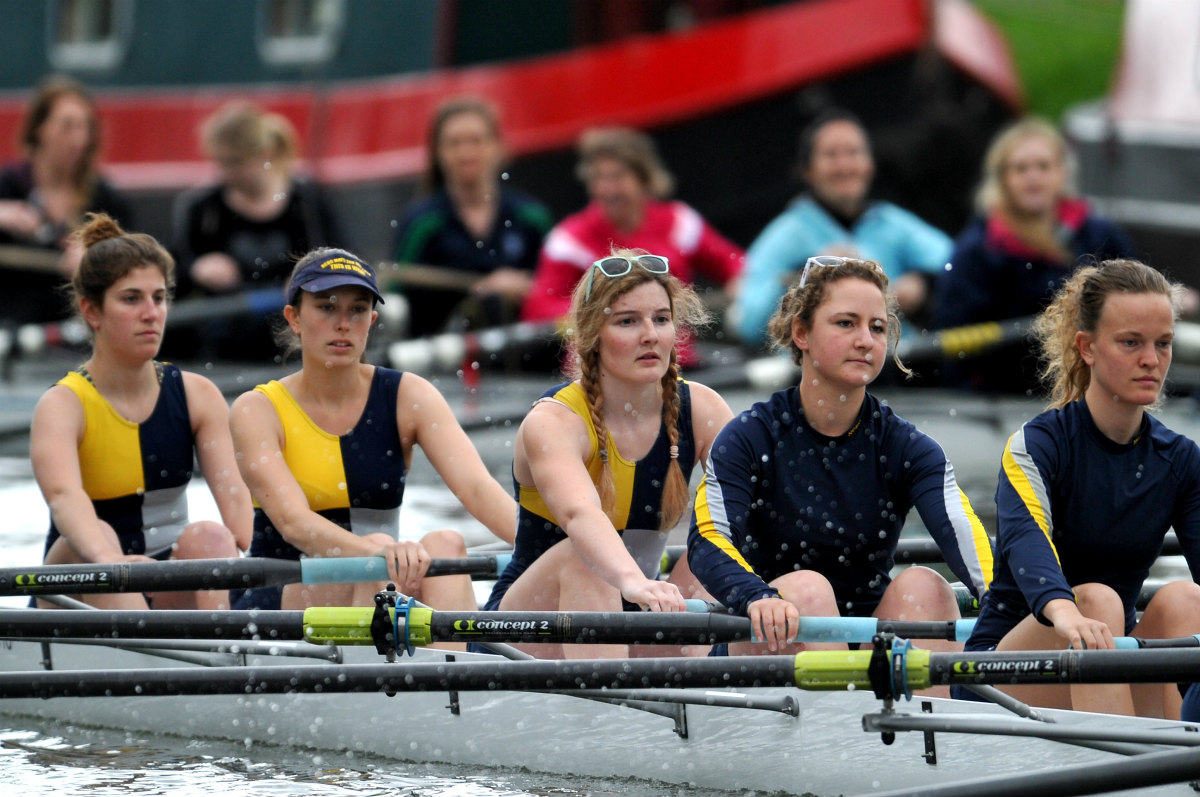 We are a short cycle ride away from the new University Sports Centre at West Cambridge, which offers reduced rates for student members, and excellent training facilities. The University’s athletics ground at Wilberforce Road lies close to the Sports Centre.

Naturally, all our sports funding is directed towards women’s sport and fitness at all levels (and not the men’s rugby or rowing team!).

Newnham has a proud tradition of our athletes representing the University and beyond. We regularly have between 20 and 35 Blues (awards given to those who represent the University in higher level competitions) each year, in squads ranging from athletics to water polo.

In recent years Newnham students have also been captains of women’s Athletics, Water Polo, Canoe Water Polo, Sailing, Hockey, Rugby and Volleyball, among others. Newnham offers financial support for training costs, both through the JCR funding, and through Opportunity Grants.

Newnham started women’s rowing at Cambridge: in the first few years in which women competed (from 1927) Newnham represented the University, although the races with Oxford were not side by side, and were judged on style merit marks, rather than speed! In 1941, with the formation of CUWBC, all the Blue Boat were still from Newnham. Although all colleges in Cambridge now have female crews, we’re very proud of our rowing tradition, and our ability to produce Blues-level rowers, often from scratch, as most have never set foot in a boat before coming to Cambridge. We’ve even produced an Olympic gold medallist in Anna Watkins, who started her rowing career at Newnham!

NCBC offers training for people new to rowing in the first (Michaelmas) and second (Lent) term, and enters at least three eights into the Lent and Easter Term ‘Bumps’ Races (it is how it sounds – crews set off at timed intervals, and the aim is to catch the crew in front before the crew behind does it to you…). The boat club is a wonderfully supportive team of women.

Newnham also has its own sports teams in Athletics, Badminton, Basketball, Football, Lacrosse, Netball, Running, Squash, Table Tennis and Tennis. Most of these compete in the inter-collegiate competitions known as Cuppers, as well as the college leagues.

For many students, sport is all about fun and relaxation – whether it’s a weekend football game or training with friends for the local half-marathon. There’s something for everyone.

The College gym is a glass-walled room with spectacular views across Cambridge. Equipment includes a cardio line and a strength section selected to be good for group sessions as well as people working individually. Much of the equipment is from Technogym, and includes a QR code, which you can scan with your phone to view an exercise video tutorial or choose one of the pre-set workouts. Gym membership is open to all Newnham students, Senior Members and staff who have completed an induction programme. For accessibility information, see AccessAble.

The JCR and MCR jointly run weekly exercise classes during term-time. While these change according to demand, Zumba, aerobics, yoga and Pilates are regularly on offer.

Newnham is one of the very few colleges to offer on-site sports fields, netball courts and tennis courts, as well as a gym. The pitches are regularly used for training sessions and inter-college matches, and the tennis courts can be booked by any member of college.

The JCR and MCR can provide grants for sports, and Opportunity Funds can also be used for this purpose. See Other Financial Support.