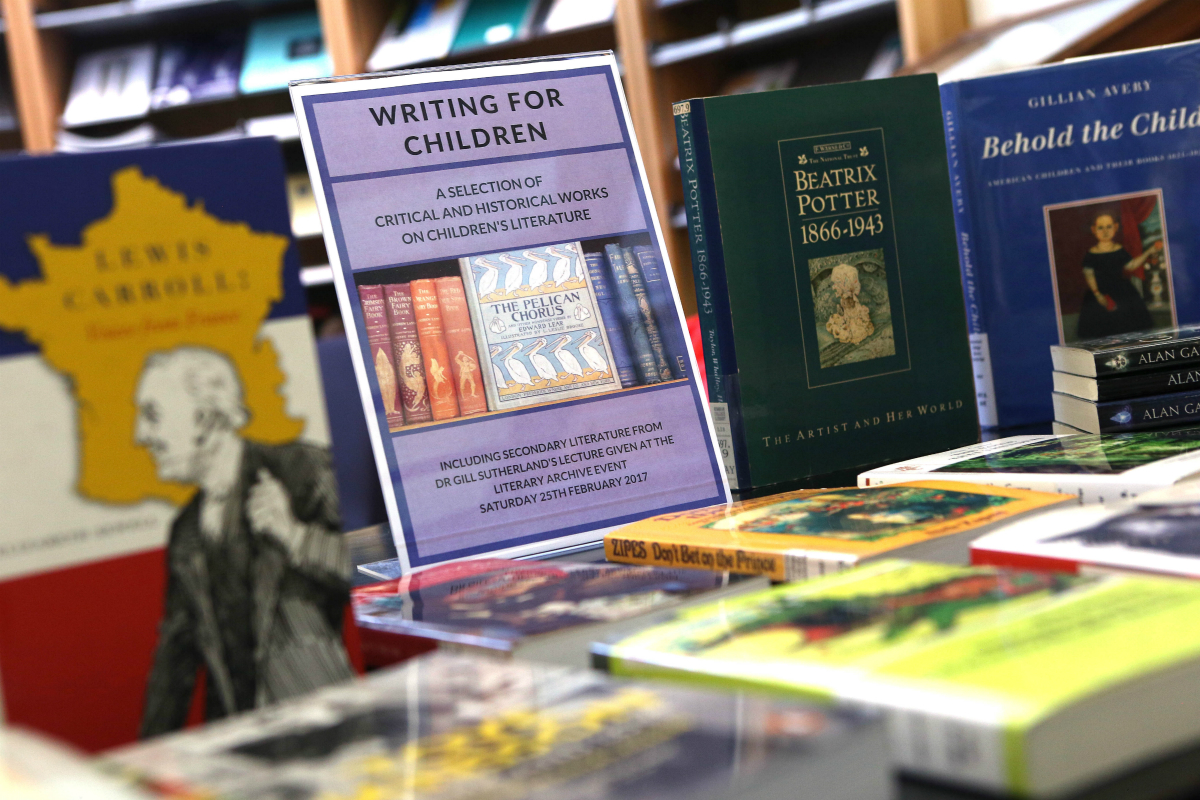 Dr Gillian Sutherland’s talk ‘A child who does not wonder is but an inlet for apple pie’: Writing for Children and the Rogers Collection at Newnham, showcased the extensive Rogers Collection held at Newnham. Gill gave an account of the ‘fine collection of books’ which were given to  Newnham in 1934 by Dr G. F Rogers. She described the works as ‘diverse’ and giving a picture of a man with ‘wide ranging, eclectic interests’. Sketching the biography of George Frederick Rogers, alumnus of Gonville and Caius, Dr Sutherland asked, ‘Why [did Rogers] choose Newnham?’ for a gift of books dominated by folk and fairy tales. There is no definitive answer but Gill suggested that as a member of the Society for Psychical Research and of the Heretics, he would have known both Eleanor Sidgwick and Jane Harrison. Gill told the audience that Rogers ‘knew and cared enough about Newnham’ to leave the College £1000 in his will, which in the inter-war years was ‘no mean sum’.  She pointed out that the collection has as much interest as other better-known collections of children’s books, and is ‘worthy of study and further investigation’: a thought perhaps for students in the audience.

Christina Hardyment (NC 1964) explored the little-known, and unconventional, influences on Swallows and Amazons author Arthur Ransome in her fascinating talk Arthur Ransome’s Literary Apprenticeship in Bohemian London 1900-1913. Hardyment acknowledged that Ransome’s work can, for some people, be ‘like marmite’, but that she wanted to encourage audience members to ‘think again, look again, and perhaps as adults to start re-reading’ his work. Christina explored Ransome’s biography, starting with his childhood, his father’s death and his move to York College in Leeds, where he chose to study the sciences to make a living. Ransome’s rejection of the sciences, and consequent move to London marked the start of his ‘self-education in literature’. Ransome’s love for Literature was evidenced in his assertion that ‘the city for me was marked by bookshops as the sea is marked by buoys’. Hardyment talked of how Ransome enjoyed the ‘urban bohemianism of cities like London and Paris’, and his visits to Paris with Clive Bell, and encounters with other bohemian writers such as the Yeats brothers, Edith Nesbitt, M P Shiel, and Pixie Goldman-Smith with whom Ransome ‘sipped opal hush… sitting around an Ouija board’. During his time working in Russia as a journalist, Hardyment spoke of Ransome’s admiration of the Russian writers and how this influenced his work; ‘writing stories to make life bearable and pleasant was just what Arthur longed to do’. Indeed, Christina concluded that this is exactly what he then went on to do with his Swallows and Amazons series.

Caroline Lawrence’s (NC 1977) lively talk Thresholds, Rewards and Alters: Three Mythic Tropes in Children’s Fiction explored her tried and tested methods of writing children’s fiction.  Caroline described herself as an ‘upbeat Californian, with an 11 year old mentality’ which lead to her pursuing an early career in teaching primary school students, where she and her year six students held Latin banquets, waited on by year five pupils ‘who begged to be slaves’. Lawrence said that she realised that she wanted to engage with ancient history on the level of 9, 10 and 11 year olds, and to  ‘hear the roars of the crowd of the Coliseum, and taste the dust raised by the chariots… smell the smoke of a morning sacrifice’. Caroline then went on to discuss how she produces her ongoing writing for children. Using examples from popular films and well known storylines, Lawrence’s talk exemplified how she creates a plot, using a set of building blocks to craft an adventure for her reader. Caroline showed how these building blocks can be seen in many of today’s popular films, including familiar examples such as Star Wars and The Hunger Games. Caroline argues that ‘plot structure is an incredibly powerful tool’ for all writers, and that she uses the formula as ‘a structure on which to hang all my ideas’.

For the afternoon’s session we were delighted to be joined by three additional well known Newnhamite authors who formed a panel bringing an extensive and varied history in the writing of children’s literature.

Anne Rooney, former Royal Literary Fund Fellow, expertly chaired the panel and helped delve into the experiences and opinions of published authors Mary Hoffman (NC 1964), Griselda Heppel (NC 1975) and Sue Limb (NC 1965). As usual, the Q&A session with our audience was lively and though-provoking, covering wide ranging subjects from author censorship to the statistics of Children’s Literature as an industry. Mary Hoffman, author of Amazing Grace, discussed the importance of writing characters which were diverse in gender, ethnicity and ability. Griselda Heppel’s reflections on her struggle with procuring a publisher for Ante’s Inferno, and consequently the world of self-publishing, gave some useful insights for any soon-to-be authors in our audience. Sue Limb’s witty anecdotes of her experiences with editors and censorship garnered the agreement from all of our panellists that an author should stay as true to themselves and their work as possible. Anne Rooney explored who it is that buys Children’s Literature, and showed that the field continues to expand despite the rise in electronic devices now aimed at children. In exploring the moral obligations for writing for a younger generation our entire panel agreed that they felt it necessary to include some aspect of hope in all of their stories, no matter how dark the subject matter.

The afternoon’s panel discussion was followed by tea and cake in the buttery, leaving our audience inspired by the day’s speakers.

Podcasts of Gill, Christina and Caroline’s talks can be found here.

You can see some pictures from the day below. 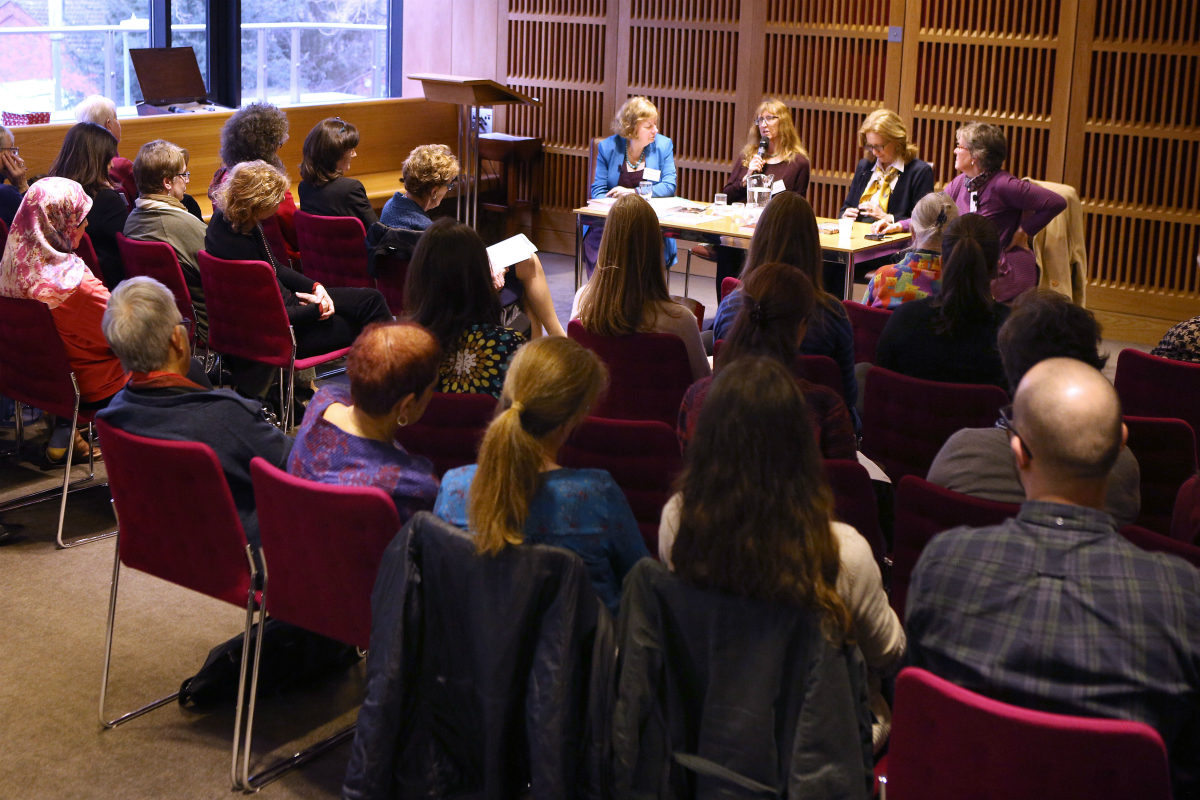 Panel members talk whilst our audience are captivated 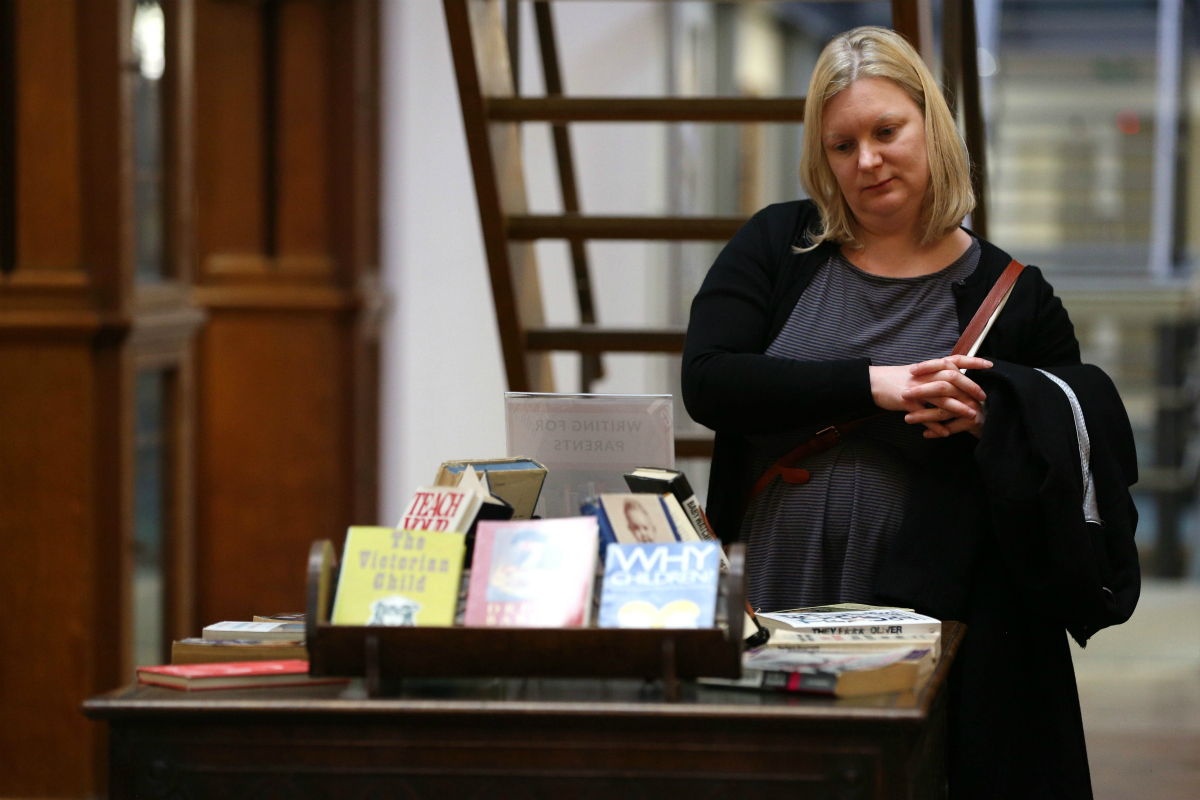 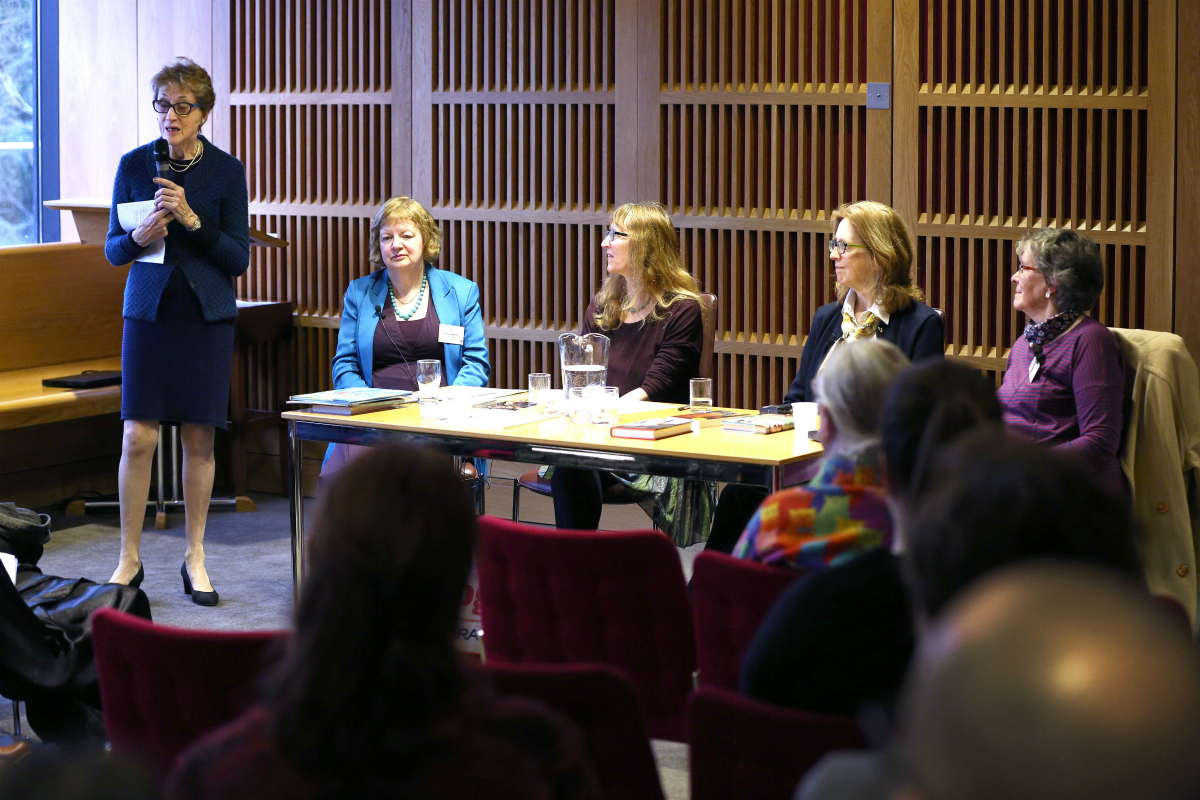 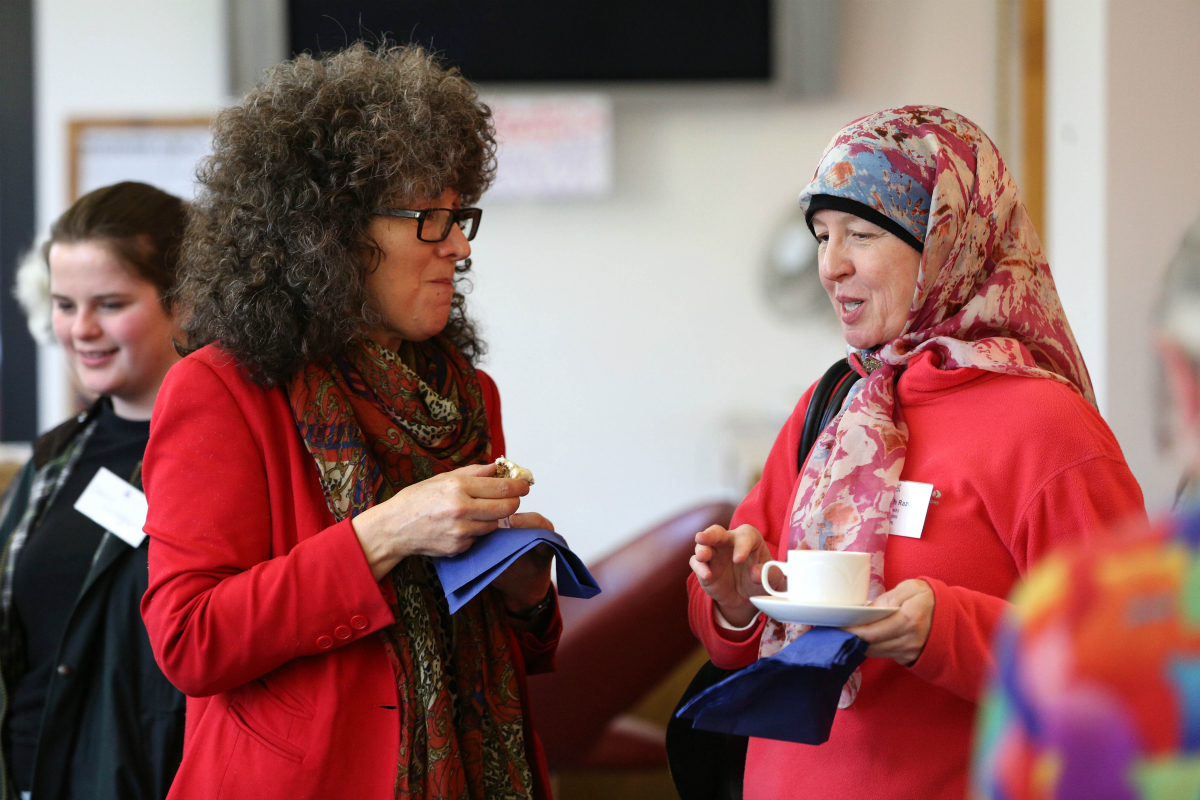 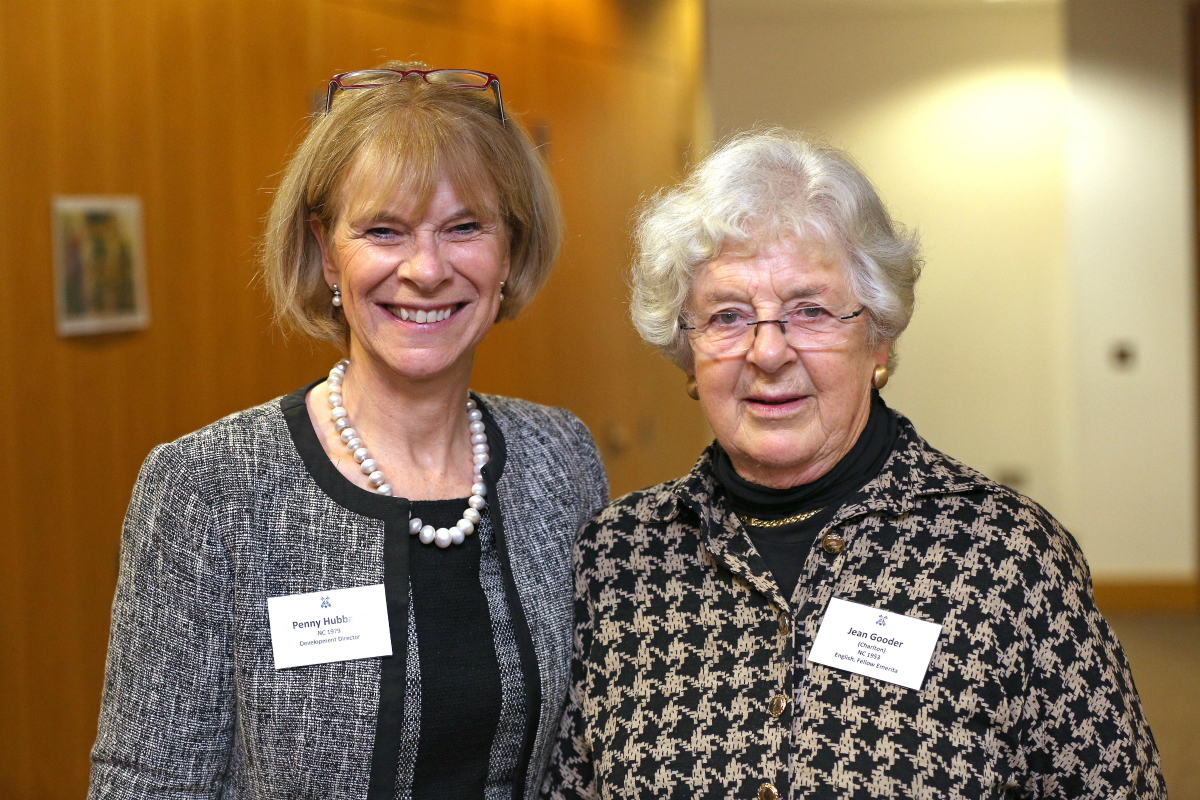 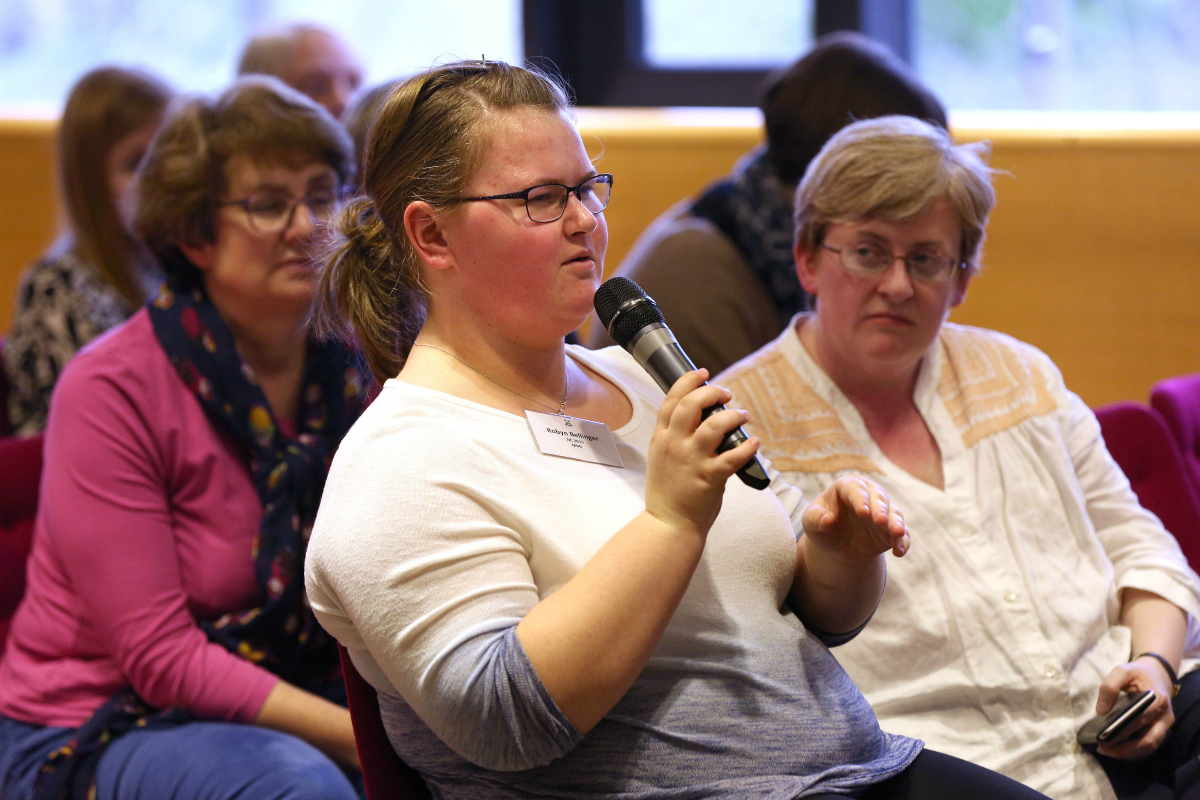 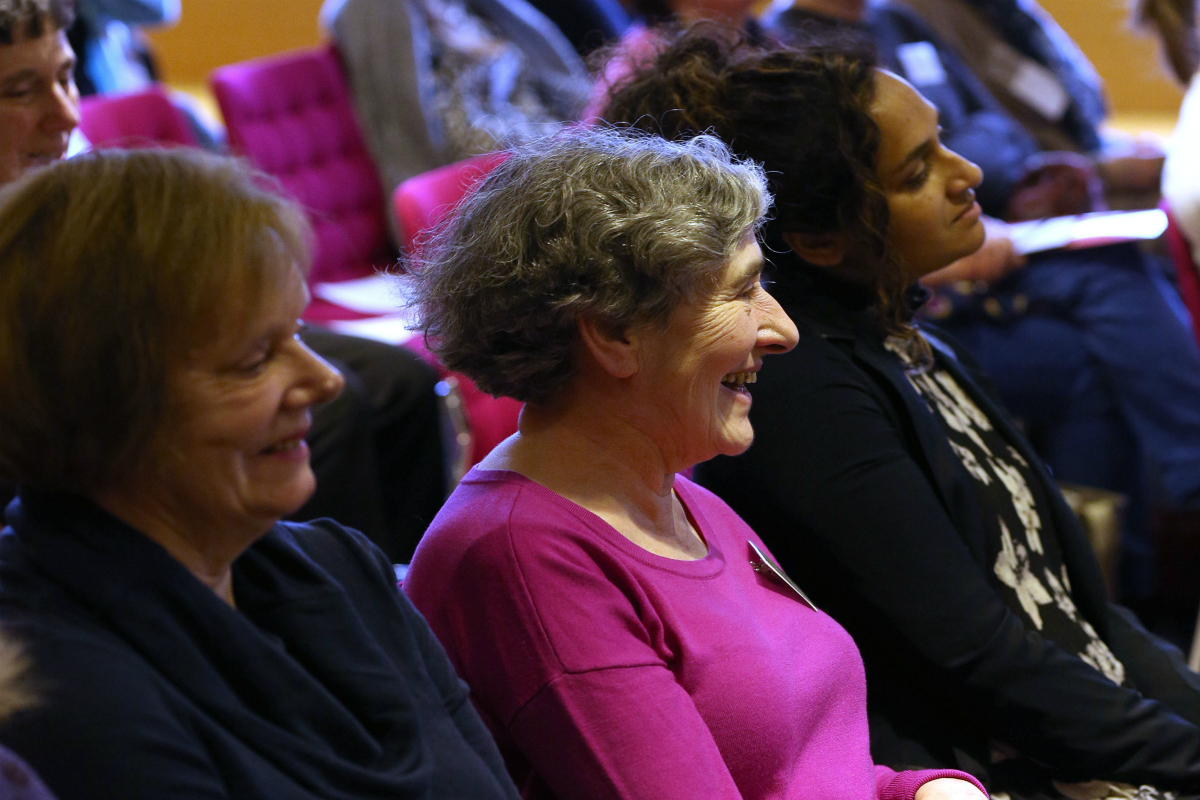 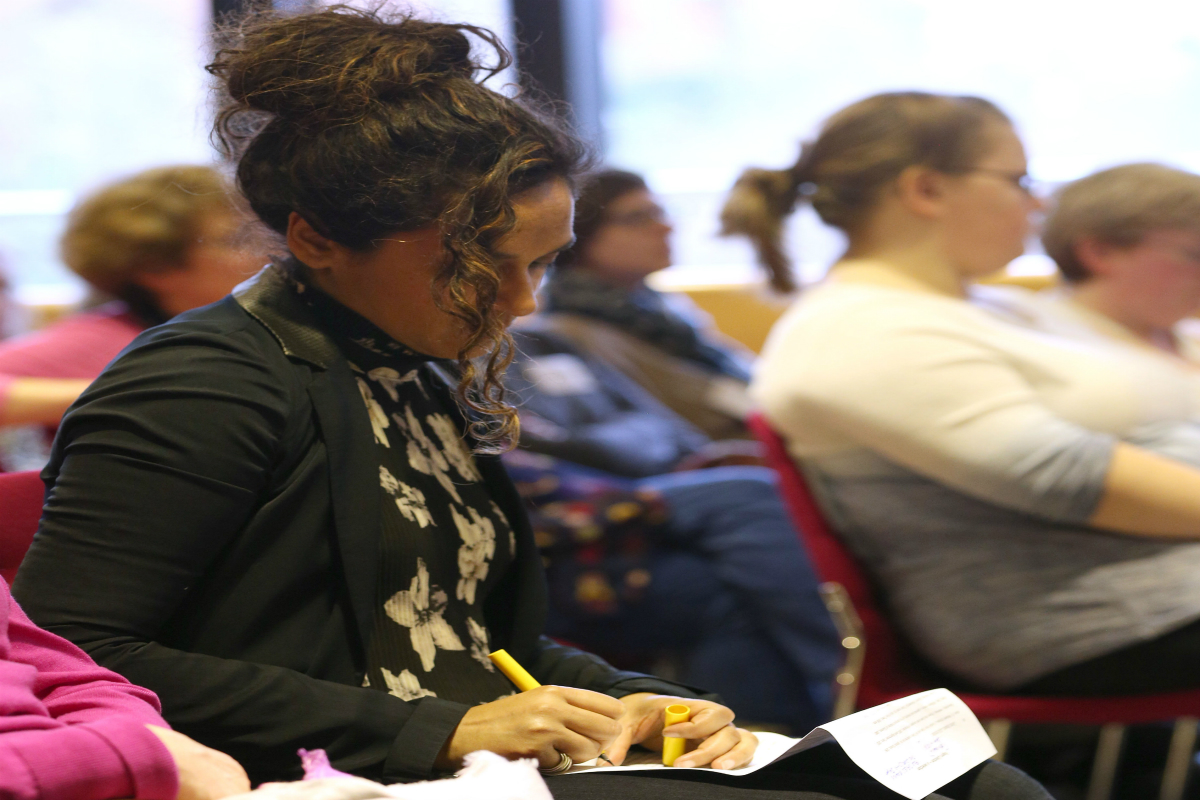 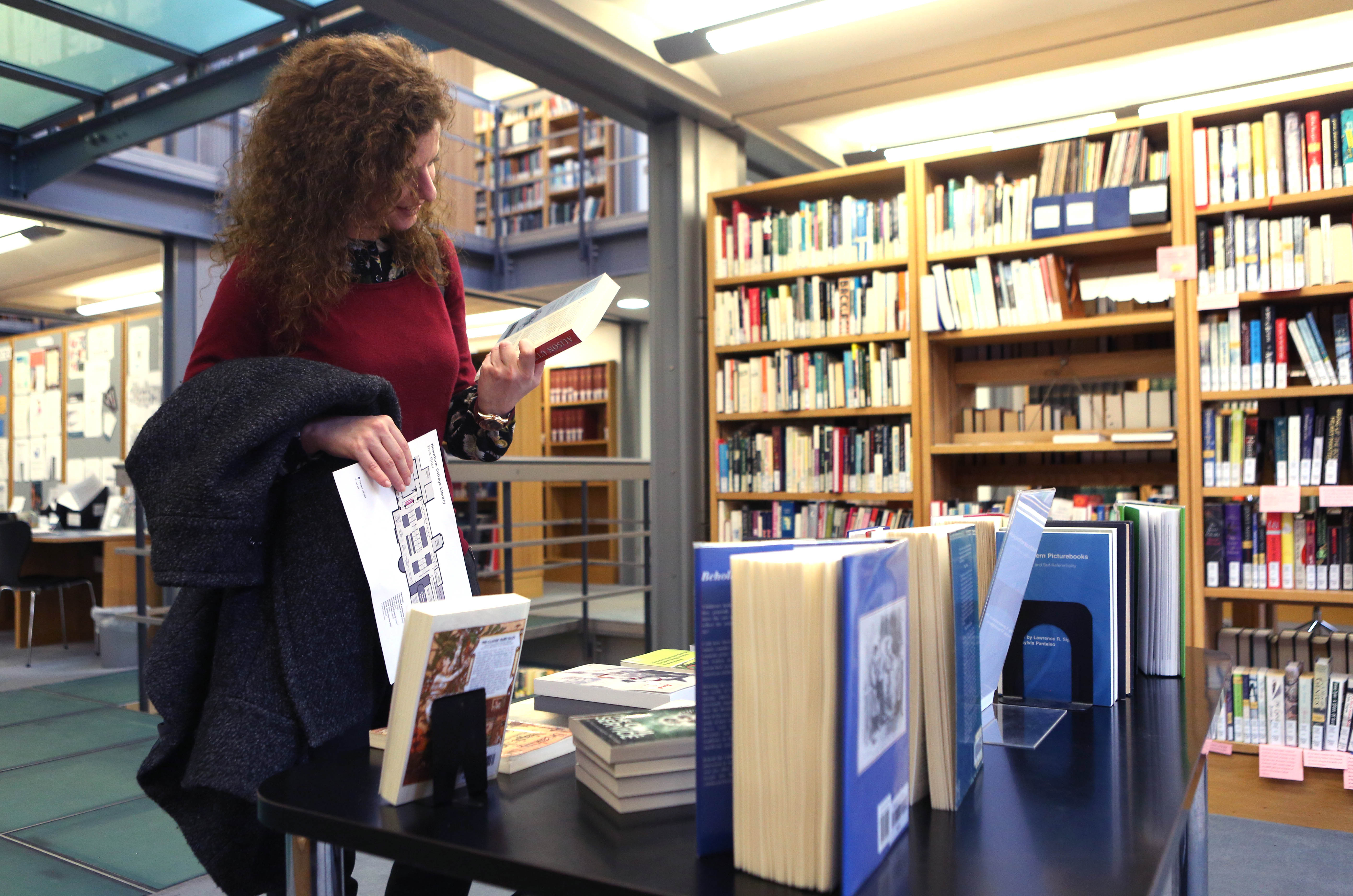 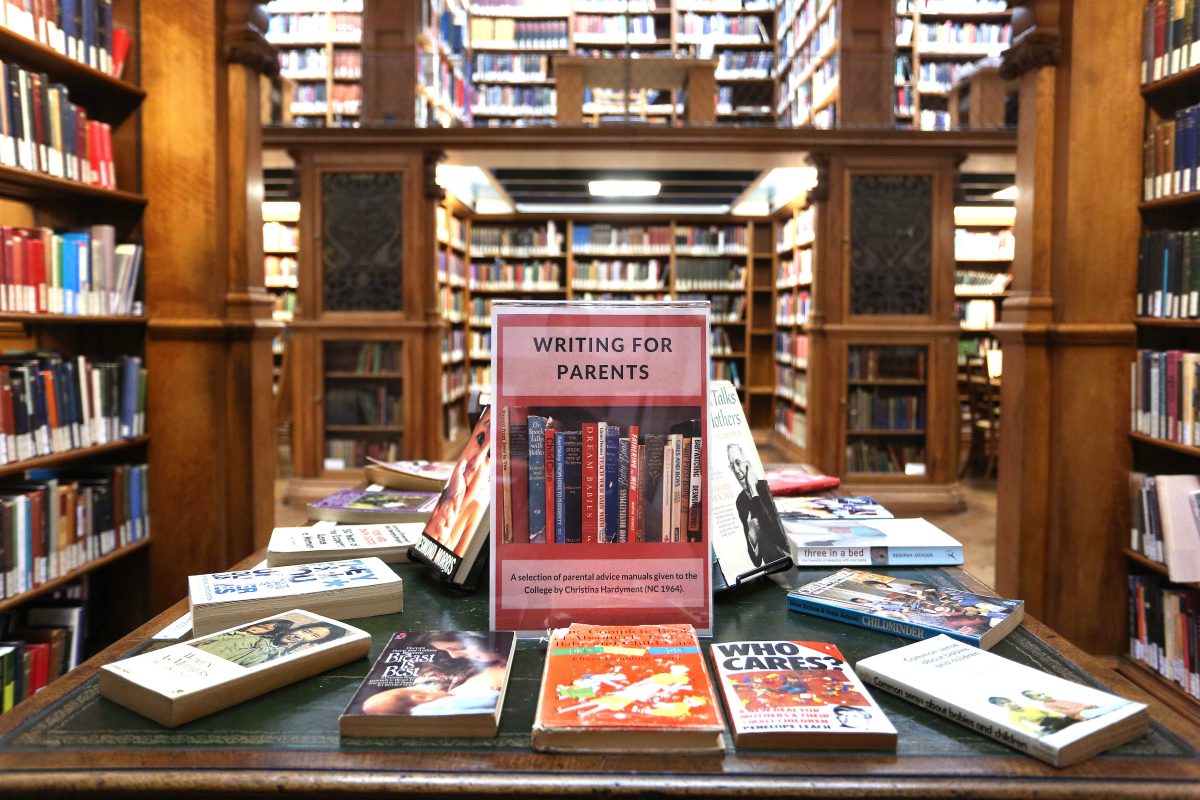 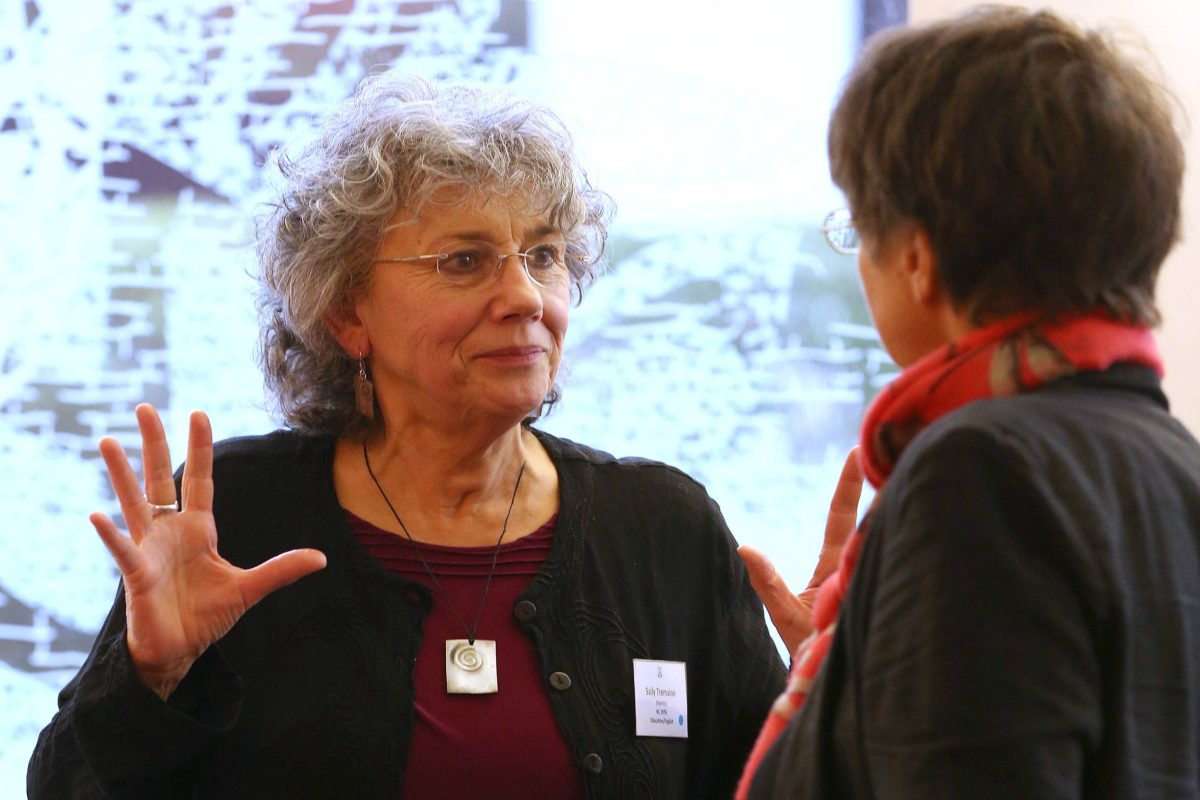