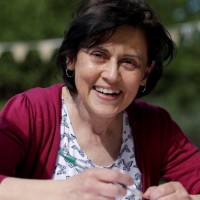 Dr Orsola Rath Spivack studied Physics in Italy at the Università degli Studi of Milan, gaining a First Class Honours degree. After a stint teaching Mathematics and Physics in secondary schools in Milan, and then Applied Mathematics at Tel-Aviv University, she moved to the UK in 1984 to study for a PhD in Applied Mathematics with Professor Derek Richards at the Open University. In 1988, she took up a post-doctoral research position at the Cavendish Laboratory in Cambridge. Following a 5 year career break in 1991 to look after her two young children, she joined Lucy Cavendish in 1995 with a Daphne Jackson Research Fellowship, and started working in the Faculty of Mathematics. She was subsequently Lu Gwei Djen Research Fellow in Lucy Cavendish, before becoming Graduate Tutor from 1999 until 2015, and Director of Studies in Mathematics from 2007.

Since 1995, she has worked on various research projects in DAMTP. She has also contributed to a variety of outreach activities over the years, becoming Faculty Admissions Officer in 2015.

Dr Rath Spivack’s current research centres on acoustic and electromagnetic wave scattering from rough surfaces, especially inverse scattering problems. Of particular interest are applications in medical imaging. Other ongoing research concerns propeller noise, and the interaction between the acoustic field and various structures, such as ship hulls and oil platforms.

Her previous research has looked at various topics in nonlinear dynamics, correspondence between classical and quantum chaos, multifractal measure in Diffusion Limited Aggregates and the Boltzmann equation for polyatomic gases.