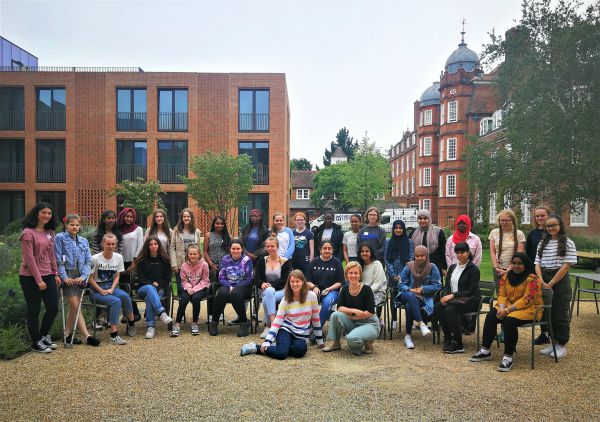 The two-day event showed teenagers the beauty of mathematics and science, with puzzles, talks and challenging maths problems, all tackled with new friends.

There was a buzz in the room right from the start, with the students from different schools finding plenty in common, and lots to discuss.

Newnham mathematics lecturer, Dr Maria Ubiali, came up with the idea for the Summer School to share her own love for maths. She wanted to tackle the issue of low participation of women in STEMM subjects where it starts, at the time when students have to choose their A-level subjects. She said the event has been “amazing”.

“I was struck by the bond among students who did not know each other until few hours before, by their enthusiastic engagement with the puzzles and the topics presented, by their deep and challenging questions to the lecturers,” Maria explained.

Maria herself works on particle physics theory, working closely with data from the Large Hadron Collider at CERN to answer fundamental questions about the origin of our Universe.

The participants met current Cambridge students and academics, and got a taster of what it would be like to study maths at University. With a view to the future, students then heard about some of the wide breadth of career opportunities that studying maths and science can open up to them.

For many of the students, it was an enjoyable change to be surrounded by other people who were equally enthusiastic about discussing maths problems.

There was time for maths-related relaxation too, with an evening film watching ‘Hidden Figures’, the film about three women mathematicians who played a crucial role in NASA’s space exploration.

The summer school was highly oversubscribed, despite being in its first year, and the 30 participants represented 21 schools. Students were nominated by their teachers.

As part of Newnham College’s outreach initiatives, the summer school was entirely free to participants, including all accommodation and food. Funds were also available to cover transport costs for attendees who have spent time in local authority care, or who are eligible for free school meals.

The summer school was kindly funded by Rachel Isherwood.

We hope to run the event again next year. To find out about this and similar Summer Schools run by Newnham College, please subscribe to our Teachers’ Email List.