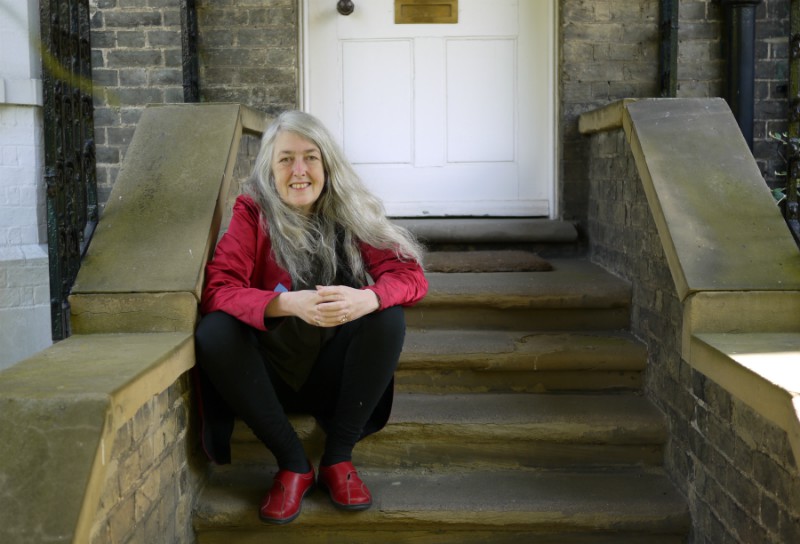 At once an incisive academic, an engaging TV presenter and an inspiring teacher, Prof Mary Beard has brought the classics to hundreds of thousands of people world-wide – and to hundreds of students at Newnham College and Cambridge University.

Newnham College is delighted to learn that Prof Beard has been recognised in the Queen’s Birthday Honours list, becoming a Dame in recognition of her services to the study of Classical Civilisation.

“I am absolutely 100% delighted – especially to realise that Classical Civilisation is still taken seriously enough to be recognised in this way. That said, I expect a good few jokes about pantomime dames….!’ says Prof Mary Beard.

Beard’s work on classical civilisation has been matched by her lively, well-informed and forceful voice for feminism. Her latest work, Women and Power, investigates the roots of the silencing of women in the Classical period, taking it forward into the present day.

But she will be remembered by generations of undergraduates, not as the famous figure on the television screens, or even the fearless debater of Twitter, but as their supervisor.

“It was Mary who encouraged me to apply to Cambridge and indeed Newnham in the first place: we had emailed a bit when I was in sixth form, before she met me at a Newnham Classics Open Day,” says Newnham classics student Charlie Pemberton. “By that stage, I really felt coming here was really meant to be. She always made sure to host end-of-term parties where we’d all get together as Newnham classicists. They have often been a highlight of the term! There is something so special about Newnham Classics, and I think Mary has come to symbolise that.”

“She gives praise when it is due, but isn’t afraid to tell you when you’ve been a numpty”

“As a supervisor, she is incredibly fair: she gives praise when it is due, but isn’t afraid to tell you when you’ve been a numpty (to put it lightly…!). Her warning never to take a source at face value – to do some digging to discover what it’s really getting at – proved invaluable in my recent exam. She didn’t just teach us the material, but how to handle or think with the material – and (as anyone who’s seen her on the telly can attest) she makes the material so accessible and memorable.”

Beard is herself an alumna of Newnham College, Cambridge, where she first studied Classics in 1973. She returned as a Fellow in 1984, at the time the only female lecturer in the Classics Faculty. She became Professor of Classics at the University of Cambridge in 2004.

Dame Carol Black, Principal of Newnham College, says: “This is well-deserved recognition of the outstanding contribution that Mary has made to the study of Classics and the promotion of public understanding of classical civilisation, a further accolade in Newnham’s highly-distinguished tradition in Classics.”

Beard is one of four alumnae of Newnham College who have received the title of Dame in this year’s Birthday Honours, alongside actor Emma Thompson, civil servant and diversity champion Sue Owen, and local government CEO Stella Manzie.

Beard was also honoured by the University of Oxford with an honorary degree in June 2018.