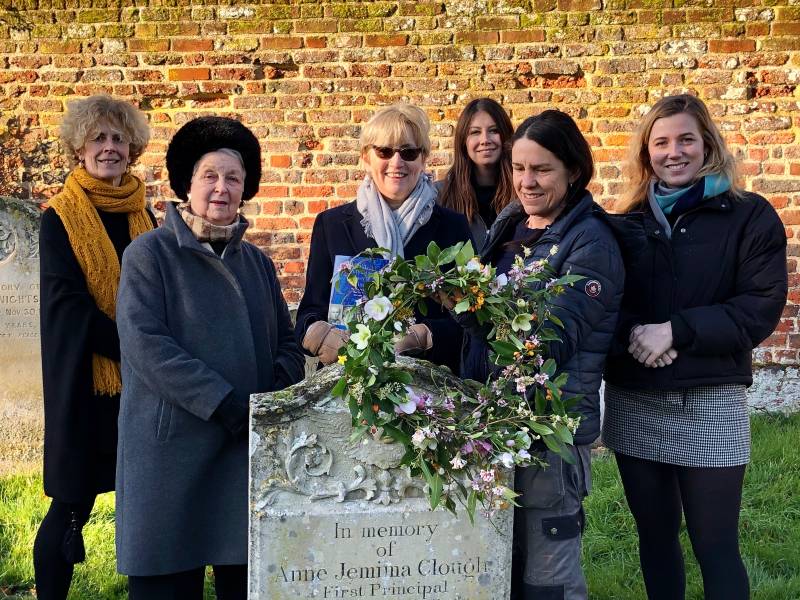 Self-taught scholar, teacher, suffragist, passionate advocate of women’s education and our founding Principal. Anne Jemima Clough was a remarkable woman, and today Newnham marked the bicentenary of her birth.

Together, representatives of the alumnae, Fellows, staff and students, led by Principal Alison Rose, walked to Grantchester to place a wreath on Miss Clough’s grave.

The wreath was made by the garden team from flowers picked from Newnham’s own gardens. Anne Jemima believed deeply in the importance of gardens for mental health, and encouraged all the students at Newnham to get out into the garden – what we might now call horticultural therapy.

Anne Jemima (1820 – 1892) was self-taught, getting up in the early mornings to study Greek alone, modelling her studies on those of her beloved brother Arthur Hugh Clough. When her father went bankrupt, Anne Jemima saw an opportunity to make a career in education. Having previously volunteered at a Liverpool charity school, she set up her own small school, bringing in an income for the family.

Keenly interested in the education of women, she made friends with other campaigners and educationalists.  After helping to found the North of England Council for Promoting the Higher Education of Women, she acted as its secretary from 1867 to 1870 and as its president from 1873 to 1874.

When the ‘Lectures for Ladies’ were set up in Cambridge in the 1870s, it became clear that women who lived at a distance would need accommodation. Henry Sidgwick invited Miss Clough to take charge of the first hostel and its first five students, setting up in Regent Street, Cambridge, in 1871.

The lectures and hostel swiftly became Newnham College, and Anne Jemima Clough its first Principal. The new college took a different approach to women’s education to Girton College, recognising that women had been denied the educational opportunities available to their brothers.

Dr Gill Sutherland, her biographer, described Miss Clough as follows, “she had inexhaustible good humour, plenty of common sense and fun, and an enviable ability to admit when she was wrong. These qualities made her students cherish her and enabled her to work well and creatively with her colleagues.”