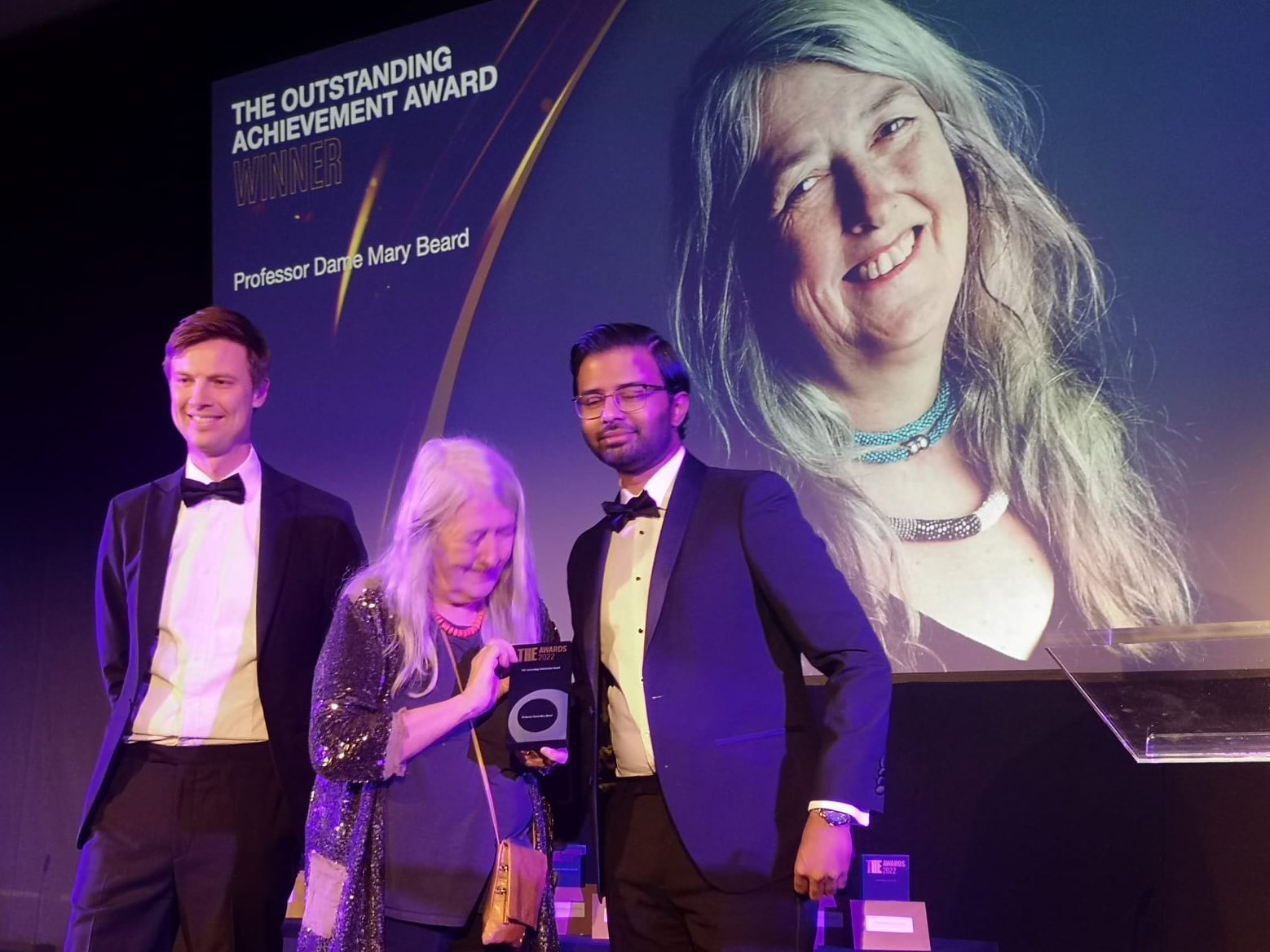 In the ‘Oscars of higher education’ the inimitable Professor Mary Beard wins THE Outstanding Achievement Award at the 2022 Higher Education Awards. Rightly recognised for her incredible achievement in having “broken through the ivory tower’s walls and brought her unique enthusiasm for her subject – and crucially, what it can teach us about contemporary life and politics – to the world”.

The awards – dubbed the “Oscars of higher education” and now in their 18th year – span 20 categories covering the full range of university activities. This year’s winners, focusing on achievements at UK and Irish institutions during 2020-21, were announced at a ceremony at the Hilton London Metropole hotel.

The THE Outstanding Achievement Award went to Newnham Fellow Emerita Dame Mary Beard, globally recognised for her television programmes and public commentary, and recently retired as professor of Classics at the University of Cambridge after four decades at the institution.

Her winning citation from The Times Education Awards

Ask 100 members of the UK public to name
an academic, and there’s a fair chance that
a significant majority would offer the same name.
Professor Dame Mary Beard, who stepped down
as professor of Classics at the University of
Cambridge this year after four decades at the
institution, is known for a multitude of reasons.
As a scholar, she has broken through the ivory
tower’s walls and brought her unique enthusiasm
for her subject – and, crucially, what it can teach
us about contemporary life and politics – to the
world.
She is known for her numerous television series
that manage to be both highbrow and unerringly
accessible.
She is a long-time columnist (“A Don’s
Life” remains a fixture in The Times Literary
Supplement) and media commentator.
But in recent years she has cut through
most strikingly on social media, where her
contributions to daily debates, drawing on
her academic expertise, bring depth and humour
to a platform that is more often characterised
by pettiness and dissent.
Alongside the media work, she has above
all else shown what it means to be a deeply
committed scholar, teaching at Newnham
College, Cambridge, since 1984, and concluding
her tenure with a parting gift of an endowment
to help students from under-represented groups
study Classics.
At a time when the role of academics in general
and the arts and humanities in particular are
questioned by some, UK higher education
is fortunate to have a star that shines as
brightly as Dame Mary, and it is our honour to
present her with this year’s THE Outstanding
Achievement Award