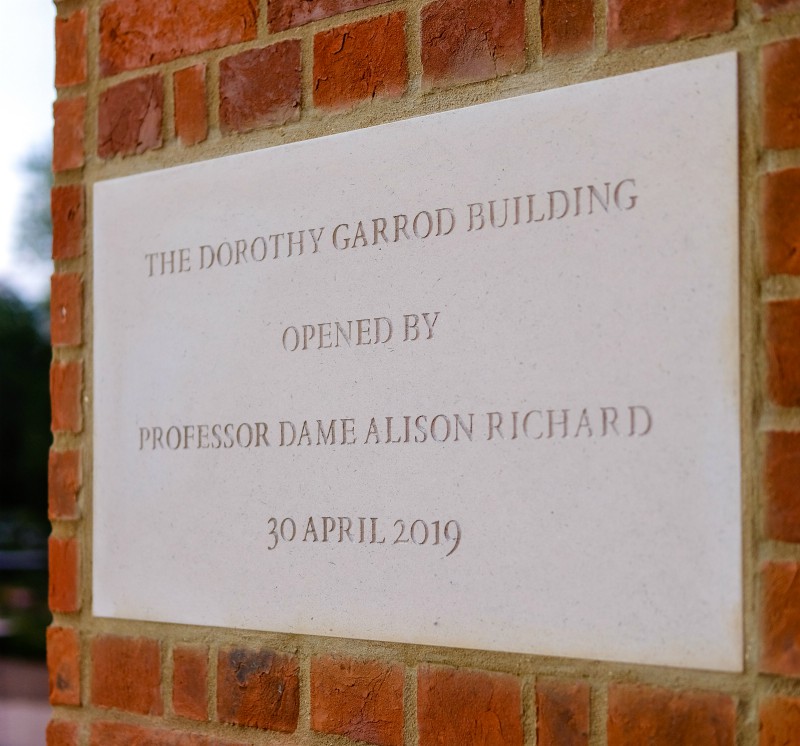 After 50 years hidden within the BBC archives, a unique piece of film was shown at Newnham College this week – and today’s archaeologists heard the voice of pioneering archaeologist Dorothy Garrod for the first time.

The film was shown at the official opening of Newnham’s new Dorothy Garrod Building, named in honour of the first woman to be appointed Professor at either Cambridge or Oxford.

The film shows the only known broadcast interview with Dorothy Garrod, recorded shortly before her death in 1967. Until this was rediscovered, historians of science had thought there were no records of her voice. In the piece, Garrod recalls her role in uncovering a famous French archaeological hoax of the 1920s, the Glozel forgeries.

For the members of the Garrod family attending the celebration, the film, kept as a surprise, was a particular delight. A member of Garrod’s family commented that he was deeply moved to finally ‘meet his great aunt face-to-face’ in the building named in her honour.

The film was tracked down by Newnham Bye Fellow Dr Ruth Charles, an Upper Palaeolithic Archaeologist with a longstanding interest in Dorothy Garrod’s research legacy.

Dr Charles explained the story. “I knew from locating the supposedly ‘lost’ archive of Dorothy Garrod’s papers in Paris and Oxford in the 1990s that there had been at least one filmed interview with her. However, at the time it was unclear whether that had actually been broadcast. But last year, while researching for the opening of our Dorothy Garrod building, I found a mention of a 1970s documentary on Glozel. I was very excited, but also knew it was quite a long shot.

“I contacted the BBC archives asking whether it was possible that a copy of the documentary still existed. They couldn’t have been more helpful and, with the information I provided, they tracked it down very quickly. A few days later I had sight of the full documentary alongside permission to show extracts at our celebration.

“There is a warmth, charm and wry humour that shines through as Garrod tells us her part in uncovering the Glozel forgeries. It was deeply moving to finally see her in action and hear her voice after all these years.”

Professor Dorothy Garrod was elected to the Disney Professorship of Archaeology in 1939, nine years before women at Cambridge were admitted to degrees or able to become full members of the University. She was thus in the paradoxical position of running a department, while being unable to have a vote on University matters. She was the first woman to hold a chair at either Cambridge or Oxford and a Newnham alumna.

The College wishes to thank the BBC Archives for their generous permission to allow us to show their copyright material at our celebratory event. Please note that the College does not have permission to put the film, or screenshots from the film, online.