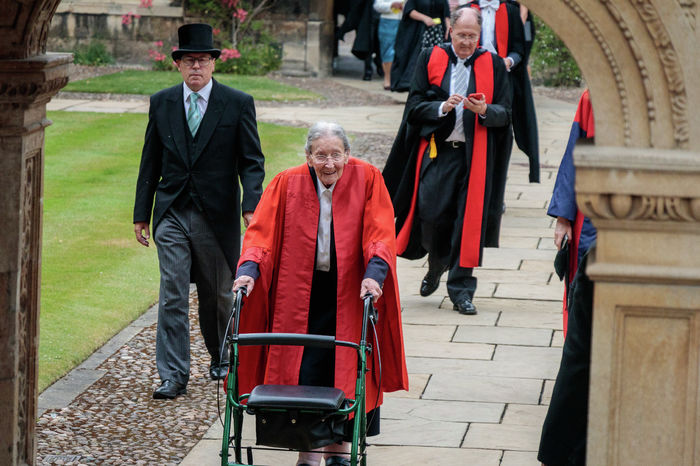 We are sad to announce the death of Honorary Fellow Joyce Reynolds, one of the world’s leading ancient historians. Here her fellow classicist Prof Mary Beard shares a tribute.

It is the end of a Newnham era. Joyce Reynolds, a Fellow (and later Honorary Fellow) of the College since 1951, long-serving Director of Studies in Classics, and one of the most distinguished ancient historians in the world, died on 11 September. She was 103 years old.

Generations of Newnham classicists will always remember the extraordinary support, combined with the intellectual challenges, she offered us. And, to be honest, we won’t forget either the slight trepidation that ‘Miss Reynolds’ (as students always called her to her face, ‘Joyce’ only amongst ourselves) inspired. One of her ex-pupils, now a very senior academic indeed, once confessed to me that even 40 years later whenever Joyce telephoned, she found herself automatically getting to her feet, as if she was about to be asked to explain why she hadn’t read that book of Thucydides she was supposed to have got through. And even in the last years of her life, I was showing her drafts of almost everything I wrote because I really wanted to hear her comments, while trembling slightly that it would not pass her test.

Joyce offered her students the very best sort of ‘tough love’. It was ‘tough’ because she had almost impossibly high standards and did not suffer fools gladly; in fact, one of her missions was to make sure that we did not turn out to be fools. But it was ‘love’, because – along with Pat Easterling another ex-pupil, who, for many years, was her college colleague – she never once let us down. We had no doubt at all that she was on our side and that, whatever scrape we got into, intellectual or otherwise, she would be there for us (supervisions sometimes lasted for hours until she was absolutely convinced that we had understood whatever point we were struggling with). I have such fond memories of her combination of committed seriousness and wonderful sense of fun, summed up in the slightly incongruous parties she hosted for colleagues and post-graduate students: they started with a lecture on some, often abstruse, subject of classical history, they finished with her signature concoction of gin and lychees.

Joyce was born in 1918, and read ‘Greats’ at Somerville College, Oxford between 1937 and 1941 – before taking a wartime post with the Board of Trade (she used to tell students with some enthusiasm that her main job had been to work out how many shoes the country needed per year, in order to decide how many people had to be left in the shoe manufacturing industry and not sent onto active service). After the war, she went back to Classics and Ancient History, first at the British School at Rome and then at the University of Newcastle. In 1951 she came to Cambridge as a fellow of Newnham, was appointed to a University Lectureship in 1957 and retired in 1984 as ‘Reader in Roman Historical Epigraphy’.

The centre of her research interests was the study of Roman inscriptions (‘epigraphy’ is the technical term): ancient texts in Latin and Greek, carved on stone or scrawled on pot or plaster – anything from official public decrees of the Roman emperor to graffiti from the walls of Pompeii. There are still plenty of these to be rediscovered, and Joyce spent many months tracking them down in the Libyan desert or in excavations in Turkey. But she was a radical in this field. She felt that many ‘epigraphers’ were rightly concerned to discover and decipher new texts (sometimes a formidably difficult task), but did not always think hard enough about the historical implications of what they had discovered. That was her trademark, and her reason for choosing the careful title ‘Roman historical epigraphy’ for her University Readership. It may not seem so from the outside, but it was a very pointed choice.

Over her long career, Joyce published more that 70 articles and several notable books. She is best known for her study of the inscriptions discovered in the excavation of the Greco-Roman town of Aphrodisias in modern Turkey; these threw entirely new light on the relations between some of the best-known names of Rome (Mark Antony and the first Roman emperor Augustus, for example) and the cities of the Eastern Mediterranean. Almost until her death, she was working at squeezing the implications out of a group of very crude (in all senses of the word!) graffiti from Pompeii.

Joyce’s career was one of extraordinary distinction, and was properly recognised – with honorary degrees (from Newcastle and Cambridge), a fellowship of the British Academy and the Academy’s ‘Kenyon Medal’ (the first woman to receive it). I can’t help thinking that, as a soft Republican, as a supporter of women’s power in many different guises, and always with an unsentimental twinkle in her eye, she would have seen a wry aptness in the moment of her passing. 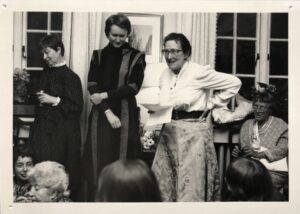 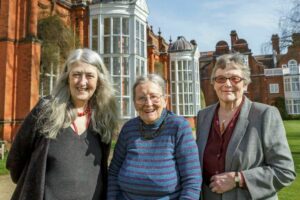